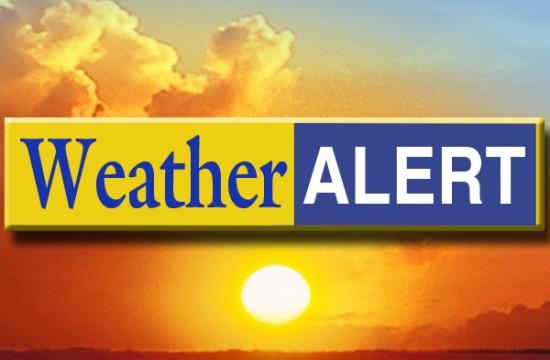 According to the NWS, the forecast for Santa Monica is a high of 86 today and Saturday, and 82 on Sunday.

The winds result from high pressure building over the Great Basin, said an NWS statement.

A wind advisory will be in effect until 3 p.m. in L.A.’s coastal zone, which consists of beach cities, metropolitan Los Angeles and the Hollywood Hills; both  the San Gabriel and Santa Monica mountains; and the San Fernando and Santa Clarita valleys.

Highs were forecast to be in the 80s today. Daytime highs Saturday and Sunday will range from the 80s to lower 90s at the coast and from the mid 80s to mid 90s in the valleys and foothills, forecasters said, blaming a ridge of high pressure.

NWS forecasters urged residents and visitors to avoid heat stress, including by scheduling outdoor activities in the morning or evening to avoid the day’s strongest heat, wearing light clothing if engaging in strenuous activities, and staying hydrated.

The weather service expressed concern for people who’ll take part in Sunday’s L.A. Marathon, saying they need to be aware of the potential for serious heat-related problems.

The marathon’s organizers also appear concerned by the heat. The entire field will start at Dodger Stadium at 6:55 a.m., 30 minutes earlier than originally scheduled in an effort to beat the heat.

Other steps will be taken to better ensure runner safety. The race will have wave starts to ensure proper runner spacing and enable more efficient replenishment of supplies at aid stations. Additional water and Gatorade Endurance Formula will be provided at all 24 aid stations.

“Cooling buses” will be stationed along the course and at the finish line; misting stations, cold towels and ice will be provided

Sunday’s high in metropolitan Los Angeles, an area that takes in the marathon course, is forecast to be 88.

The NWS forecast sunny skies today along with highs of 75 on Mount Wilson; 79 in Palmdale; 80 in Lancaster; 82 in Avalon and San Clemente; 85 in Saugus; 86 in Laguna Beach; 87 at LAX and Newport Beach; 90 in Mission Viejo, Pasadena, San Gabriel and Burbank; 91 in Woodland Hills; 92 in downtown L.A., Irvine and Yorba Linda; 93 in Long Beach and Anaheim; and 94 in Fullerton.

Highs will rise slightly Saturday, begin a slow downward trend on Sunday, and generally revert to the 70s starting Tuesday.