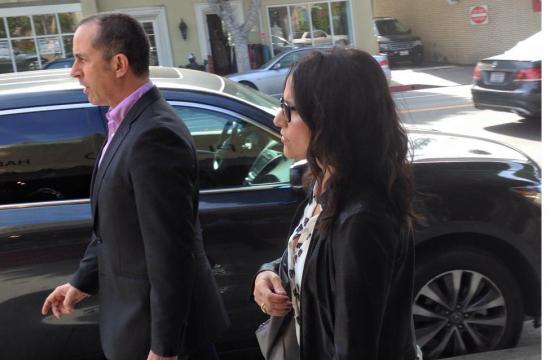 Plantino owner Sabine Lehmann said she was standing in line in front of them at Caffe Luxxe at 925 Montana Ave. at about 11 am, saying they were going to leave, before she told them “you can’t leave, it’s the best coffee in LA!”

She said the pair ordered two cappuccinos as four cameras and a crew of eight filmed their every move.

“They were sitting at the table for a long time,” Lehmann said. “Julia came back and said ‘can you please make these hotter’ as they had cooled off. I know [Caffe Luxxe] make their coffee cooler, not extra hot, because that’s how coffee is enjoyed in Europe so you can actually taste the flavor. The staff said they don’t heat them up, but they said they would make two new ones extra hot for them.”

Lehmann said she was able to snap a few photos of them from inside her store at 909 Montana Ave. as they walked from Seinfeld’s Aston Martin to the coffee shop.