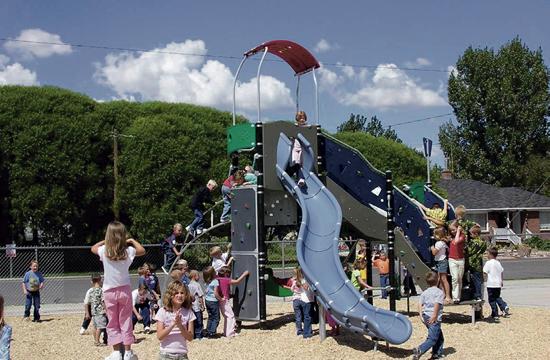 As part of its 100th birthday celebrations, Kiwanis International is promoting the creation of children’s playgrounds around the world. More than 11 new playgrounds are to be built in 2015.

The aging playground at Ozone Park in the Borderline neighborhood of Santa Monica has seen better days.

Some of the wood pieces are splintered, there is aging and bent equipment, and a general need for a remodel. A planned safety upgrade for the park by the City would not include any new playground apparatus due to budget constraints. In fact, the most popular element in the park, the 30 year old slide, would have to be removed due to safety concerns.

This is where Phil Brock, a Kiwanis Club of Santa Monica board member who also happens to be the Chair of Santa Monica’s Recreation and Parks Commission, made a proposal.

He brought together the needs of the kids at Ozone Park, and the goals of the 100-year celebration of Kiwanis International.

He suggested to his fellow Kiwanians that they could best serve the youth of the city by making possible the renovation of this playground in Ozone Park.

This $50,000 contribution to the Ozone Park renovation would be a unique one-time grant.

Choosing Ozone Park as a place to make this substantial grant was a yearlong process for the members of the Kiwanis Club, involving meetings with the Recreation and Parks Commission and residents of the Borderline neighborhood.

The Borderline neighborhood in which Ozone Park is located is a densely populated area of predominantly small single-family homes with small lots and no yards. It’s a neighborhood mostly made up of young families who take pride in their neighborhood by helping to maintain their park, picking up where city maintenance leaves off.

The Kiwanis members asked the children who use Ozone Park what they would like to have in a playground.

The kids voiced their wishes: more places to climb, elevated towers and platforms, forts or tree houses, and of course, slides.

Kiwanis Club members then made a presentation to the neighborhood residents, who enthusiastically provided further input. The donation offer was presented to the Recreation and Parks Commission, who voted unanimously in favor of its acceptance. The Chair of the Borderline Neighborhood Association, Patricia Godon-Tan, commented “this is the best thing that has ever happened to our neighborhood!”

Recreation and Parks Commissioner Lori Brown offered a “monumental thank you to our fearless community leaders who have joined forces to bring new life to Ozone Park. Borderline neighborhood members, City Staff, Recreation and Parks Commission Chairperson Phil Brock, local children and The Kiwanis Club of Santa Monica worked uniquely in collaboration to bring together a fantastic brand new landscape to our south side community park, while still being able to maintain its character and charm.”

Upon its endorsement by the Recreation and Parks Commission, the donation offer has been forwarded to the Santa Monica City Council for their approval, scheduled for the April 28 meeting. Pending this action, the renovated Ozone Park Playground is on target to open this summer.