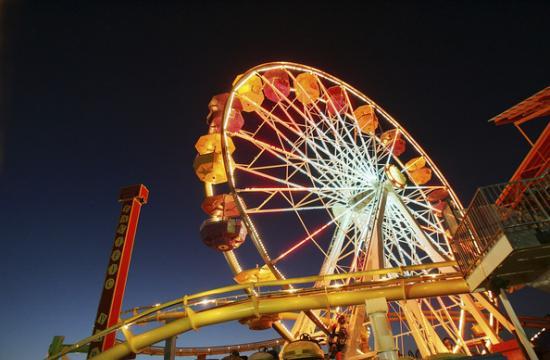 The Santa Monica Pier Ferris wheel, the landmark Los Angeles City Hall, and the glowing LAX gateway pylons are among the iconic structures around the world that will go dark for 60 minutes tonight in observance of the World Wildlife Fund’s annual Earth Hour call for energy conservation.

Many L.A. landmarks will go dark, including Getty Center, Paramount Studios, the architectural lighting on bridges at the Port of Los Angeles and structures at UCLA and USC.

The illuminated pylons that mark the entrance to LAX will glow in various shades of green for prior to going dark for Earth Hour, which lasts from 8:30 to 9:30 p.m., according to airport officials.

In Santa Monica, the solar-powered Ferris wheel on the Santa Monica Pier will fade to black, with the exception of wheel-rim safety lighting.

“Climate change is at our doorstep, and unless we take action now, we face dire environmental and economic consequences,” the mayor said in a prepared statement.

The DWP’s headquarters, known as the John Ferraro Building, will also be blacked out. That landmark is atop Bunker Hill, near the Four Level Interchange.

Among the worldwide landmarks that are also set to go dark for the event, at 8:30 local time in each time zone, are the Eiffel Tower, Big Ben, the Houses of Parliament in London and the Acropolis in Greece.