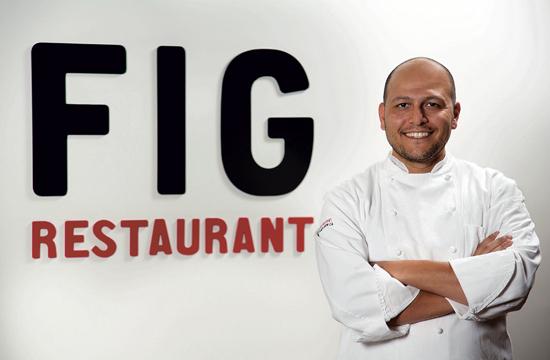 Regulars at FIG restaurant at the Fairmont Miramar in recent months may have noticed a change in direction on the menu – that’s thanks to the Santa Monica restaurant welcoming a new executive chef in September: Yousef Ghalaini.

Since joining FIG, Ghalaini said he has been able to celebrate his passion and commitment for working with local farmers and using the freshest California ingredients to create Mediterranean inspired cuisine.

As a native of Lebanon, Ghalaini was immersed in the culture of food at his grandfather’s bakery where he learned the art of the wood-burning oven at an early age – a skill he has mastered today.

After graduating from the Culinary Institute of America in Napa Valley, he honed his food and wine skills at Go Fish restaurant and Robert Sinskey Vineyards, before landing at the Michelin-rated REDD restaurant, mastering one of the most celebrated styles of California cuisine.

During his career he opened Steak 954 at the W Hotel in Ft. Lauderdale, Florida, followed by Imperial No. Nine at the Mondrian SoHo Hotel in New York City.

Most recently, Ghalaini spearheaded the opening of the Bench at the Lodge at Pebble Beach, a casually elegant restaurant on Stillwater Cove featuring California-Med inspired dishes prepared on open flame, as well as stunning views of one of the most famous finishing holes in golf.

Since moving to Santa Monica, Ghalaini said he loves the personality of FIG and the regulars that the restaurant welcomes.

“We are starting to focus on Mediterranean flavors and are moving in a direction of using more vegetables at the center of the plate,” Ghalaini said. “We incorporate middle eastern and north African spices to compliment the flavors of FIG’s dishes.”

He said the changing of the seasons will be reflected in his next menu.

“We invite you to come visit us and taste several our seasonally inspired dishes we will offer to the community at Arizona and the Third Street Promenade,” he said.