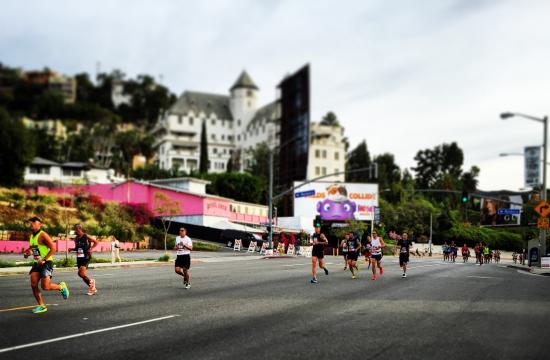 Hot weather and a grueling challenge proved to be too much for almost 200 of the more than 26,000 runners who slogged through temperatures in the 90s during the 30th annual Los Angeles Marathon.

One runner was brought back to life after suffering cardiac arrest at mile 22, on San Vicente Boulevard near Montana Avenue in Brentwood. Paramedics were able to restart his heart, and took the 61-year-old man to a hospital, where he was last reported to be conscious.

In last year’s marathon, a 28-year-old man who said he was running the race to check off an item on his bucket list almost died when he got overheated and went into cardiac arrest at mile 20, before he was revived by paramedics and was treated at a hospital.

As of 4:30 p.m., the joint marathon command post said 36 people had been taken to emergency rooms from the marathon course.

They were among 185 runners who had been given medical treatment along the route by paramedics from Los Angeles County and the cities of Los Angeles, Beverly Hills and Santa Monica, said spokeswoman Capt. Stacy Gerlich, of the city of LA.

Los Angeles police said there were no law enforcement issues of any type as tens of thousands of people participated as runners, volunteers, performers or spectators.

The temperature at the start of the race was 67 degrees, according to race organizers. That’s the third warmest start in the race history and the warmest since 2004 when it was 76. The warmest start was 79 in 1993.