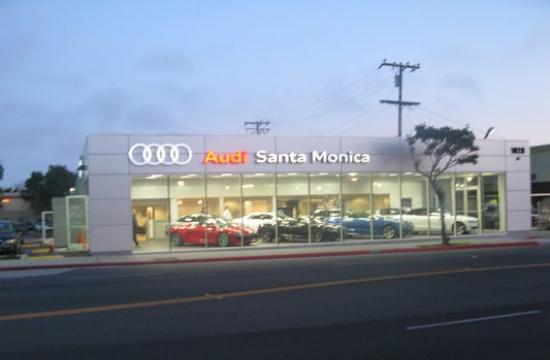 A man suspected of carjacking an Audi A4 during a Santa Monica dealer test ride led LAPD officers on a pursuit in Northridge before crashing the car and being subdued by a non-lethal beanbag, police said today.

The car was reported carjacked Friday when a salesman was ordered out during a test drive in Santa Monica.

Officers first pulled over the Audi about 10 p.m. Sunday at Tampa Avenue and Saticoy Street, said Los Angeles police Sgt. Jeff Graham. “They made contact with the driver and checked his driver’s license and the VIN number of the car,” Graham said. “The car came back stolen.”

Officers prepared for a possible pursuit by calling for a police helicopter and backup units before asking the man to get out of the car, he said.

“A short pursuit ensued,” he said.

The carjacking suspect led police about 2 1/2 miles to Napa Street and Wystone Avenue, where he crashed the car into a block wall and iron fence and stayed inside despite officer orders to come out, Graham said.

The suspect pointed his fingers like guns at the officers outside the car and was talking, although they could not hear what he was saying, the sergeant said. “Clearly he was just trying to taunt the officers.”

When the suspect did exit the car he held two “pretty good-sized” knives, Graham said. Officers shot him once with a non-lethal beanbag, he dropped the knives and was taken into custody at 10:45 p.m. without further incident