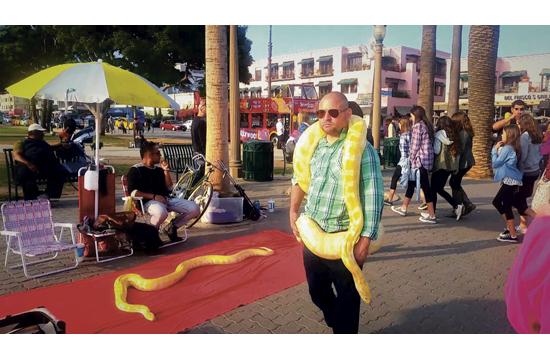 We often anguish over decisions involving animals here in Santa Monica, such as the recent business involving pony rides at the Main Street farmer’s market.

But a quick and tidy ordinance passed unanimously by the City Council demonstrates that we aren’t always bogged-down by looking at every conceivable angle over and over again when it comes to what we might call rights for non-humans. Because sometimes, a big snake is just a big snake… not something that deserves long hours of City Council hand-wringing.

The Council has voted unanimously to ban exotic animal handlers from exhibiting their reptile and exotic bird pets – oh, and no monkeys, either – in all City parks and sidewalks adjacent to the parks, beaches, Oceanfront Walk, the Pier and Pier ramp, Third Street Promenade, and Transit Mall.

Put another way, those of you hoping to get a shot of yourself draped in a boa constrictor either on your next picnic or visit to the Apple store are in for some disappointment. It turns out that all of outdoor Santa Monica is neither a zoo or a carnival midway or an embarrassment of city indulgence.

Was there ever an argument? If on the way to the Pier merry-go-round your youngster were to view a big snake or lizard that forever made it impossible to get them to go to bed at night without screaming in their sleep, that might possibly be construed as an educational experience.

However tourists from around the world might have come to the famous Santa Monica Pier only to be greeted by a live buffet of reptiles on blankets and gone home wondering why our city would allow such a low-rent exhibition just to prove that we believe snakes have rights.

Was some kind of tradition on display? One could argue that a live lizard resting on some dude’s heavily tattooed shoulder is an iconic symbol of the freedom found in beach culture. I mean, beachfront vendors profit from selling toy VW hippie vans, pot smoking gear, and little surfboard replicas. Shouldn’t Lloyd and his iguana Suzie be allowed to integrate with the public and ask for some spare change… you know, for iguana chow?

Uh, no. Exotic pets may be a small but recurring element in beach life culture, if we agree that such a culture exists and further that we need to fully represent it. But if I lived in Santa Monica and owned a camel, would you want me to bring my camel to the Pier on weekends? You know, so that for a small donation it could shriek at the top of its lungs and spray spit on the crowds? What about cleaning up after a camel? I assume that would be my responsibility as the camel’s owner. If you think a snake stirs the imagination of really young kids, see how many questions they bombard you with after watching a camel defecate on what was otherwise – up to that moment – a wonderful family afternoon at the beach. Just try changing the subject during that conversation; I dare you.

All right, but…what about dogs getting to go everywhere? We bend over backwards in Santa Monica for dogs, even building them their own parks, and yet we do nothing for snakes? I think, as in the slug line in the dog food commercial, that “Dogs Rule.” And that’s just a hard fact of life that reptiles and exotic birds are going to have to learn to deal with. Historically once dogs had set-up shop in our homes, with their own beds and food and toys, it became much harder for iguanas to lay claim to what we might call “dog privilege.”

Additionally the man-made world, both indoors and out, is now the actual environment of dogs.

According to veterinarians, that’s not true for exotic reptiles and birds.

Reporting in The Mirror by Mariella Rudi included a vet’s statement that the exotics can be “habituated” but they will never become “domesticated.” Snakes and exotic birds will accept that you, their owner, are around and might be carrying some tasty treats. Dogs actually set their little dog watchers to when you come home from work and they want to be with you. Otherwise, they wouldn’t spend so much time straightening-up the sofa they’ve been lying on before you get home.

The City Council has done us two favors, really. They have banned the brandishing of snakes and exotic birds at public locations where the owners can intimidate tourists into making contributions and tips. That makes access to the Pier and being out in our city a bit less tacky. Then the Council didn’t dwell on making a decision, which likely saved us from emotional testimony about how iguanas can actually demonstrate love to their owners. At one point, there was apparently somebody bringing a monkey to the Pier and maybe that encounter could make a big moment in a day for a kid.

But the most recent update I’ve had on how it’s going between humans and primates, “Dawn of the Planet of the Apes,” made it look like things are still a little bumpy in that particular relationship.