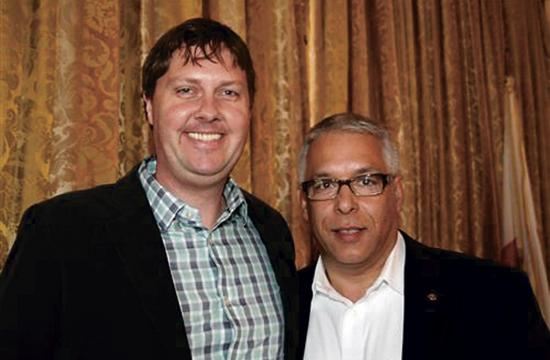 Santa Monica Rotarians at the March 20 meeting were enlightened by a knowledgeable investor about the world of entrepreneurship. Before the guest speaker shared his perspectives, Rotarian Russ Warner led the club in an invocation and song leaders Matt Williams and Ken Waltzer jubilantly led the Rotarians into the classic “Under the Boardwalk” with a lyrical spin.

The club members then awarded checks to grantees Josh Olson of Angel Flight West as well as Laura Rosenbaum of the Santa Monica Bay Area Human Relations Council, Cameras for Kids, which were presented by Rotarians Donna Byrd and Gita Runkle, respectively.

After an introduction by Len Lanzi, during which he shared the guest speaker’s accomplishments with the audience, David Travers took to the podium.

Not only is Travers a partner at Rustic Canyon Partners and a co-founder of Basepoint Ventures – both of which are located in Santa Monica – he also has extensive experience in both the political and business realms as a former executive assistant to the National Security at the White House and a strategic planning analyst for the Walt Disney Company.

Travers jokingly began his presentation by noting that the last time he was at a Rotary meeting was two decades ago when he was awarded a scholarship from the Napa Valley Rotary Club.

“Consider this to be in my 20-year check-in,” Travers said. “I’m here to share with you the mindset of a venture capitalist.”

Travers first delved into his personal background and how he became involved with his current line of work.

“I grew up as the son of an entrepreneur and I always saw myself becoming an entrepreneur,” Travers said. “Meeting with hundreds of entrepreneurs a year was the perfect gig for me. After I spent time at the White House, I found my way to Rustic Canyon Partners here in Santa Monica.”

Travers said that the objective of his presentation was to share venture capitalist trends within technology-based enterprise, emphasizing the role of technology as it “has a huge impact on all of us, more and more every day” in virtually all sectors of the world from non-profits to government.

“For the past decade I’ve been investing in early-stage start-ups that are all high-tech and all touch software in some way,” Travers explained. “This involves a lot of mobile applications and software companies.”

Travers expanded on three examples of the effects of technology: the power of individual talent, the shift of the Silicon Valley, and the underestimation of the mobile.

“We think a lot about the way the world is and the way the world is changing,” Travers said. “Normally when we make an investment, it’s to receive a big return five to 10 years later. We’re willing to take a lot of risk. The rate at which some people are going to impact the world in small groups or even by themselves is growing: that’s the world we’re headed for.”

According to Travers, Silicon Valley was not always known as the cradle of technology – as Detroit served as the parallel hub in the 1960s and 1970s – which implies that there may be an imminent change in the concentration of high-tech companies.

“I don’t think Silicon Valley is going away, but it’s not necessarily the way it’ll always be,” Travers said. “It’s rapidly shifting today.”

Lastly, Travers touched on the idea that “mobile is still underappreciated.”

By displaying a graph that showed that there were more mobile device owners than there were toilet owners, Travers conveyed to the audience the prominent role of technology.

“This year was the first year where there were more mobile phones with Internet connections than there were people on earth,” Travers said.

The speaker provided the example of an online Stanford computer science course, in which only three of the top 100 students were physically present in class due to its Internet accessibility.

“The implications of this widespread technology are not fully understood by anyone,” he said.

Travers concluded his presentation with a question-and-answer session, during which several Rotarians expressed their interest and curiosity in the growingly relevant relationship between technology and entrepreneurship.