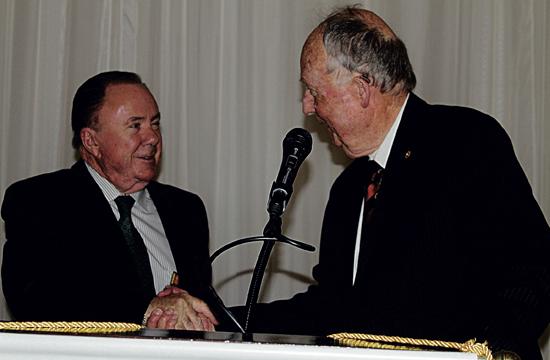 Members of the Rotary Club of Santa Monica received a glimpse of the projects that their funds support at their meeting last Friday, Feb. 28.

After collectively singing a handful of tunes to liven up the friendly atmosphere, guests of Rotarians were introduced, a grant was awarded, and a new member was inducted.

The Joe Torre Safe at Home organization was awarded a $2,000 grant, which Daniel Knowles, Director of Advancement, accepted. Knowles informed the club that the funds would go toward furnishing purposes at the organization’s new facility at the Boys & Girls Club of Santa Monica and expressed his gratitude for the monetary support.

The afternoon proceeded with guest speaker Richard Ham, president-elect of the Manhattan Beach Rotary Club and an active member of the Boards of International Service, Community Service, and Vocational Service.

It was appropriate that Rosemary Regalbuto, who accompanied Ham on the District 5280 humanitarian trip to Guatemala, introduced the speaker, who was the chairman of the trip. Ham opened up the conversation by describing a bit of the planning process.

“Planning the trip took over a period of a year and a half,” Ham said. “But it was really worth it.”

Ham said that he and his committee of nine wound up approving six projects and raised an overall amount of $435,000. The trip itself cost about $250,000, which ultimately fed and helped boost Guatemala’s economy.

Ham also partnered with Rotarians in Guatemala in order to narrow down some of the priorities – such as sustainability and maintainability – that the residents themselves wanted to focus on. He spent about six months “going back and forth to Guatemala” in order to gain a clearer grasp on some of the ongoing endeavors within the country.

A few members of the Santa Monica Rotary Club touched on some of the specificities of the projects that they contributed to.

“The [Guatemala Literacy project] is a literacy program that never ceases to amaze me,” said Santa Monica Rotarian Russ Warner.

As an initiative that supports underprivileged children in Guatemala by supplying textbooks, scholarships, and other literacy programs, the GLP has been “supported by over 430 Rotary Clubs.”

The Santa Monica Rotary Club contributed to providing a thousand eco-stoves to the country as well, which allow families to cook and barbecue within their households through proper ventilation. As a result, the stoves “will greatly reduce the risk of respiratory disease.”

Alongside such projects were also pleasant memories of playing games and simply becoming acquainted with the fellow Guatemalans, as Santa Monica Rotarian Rosemary Regalbuto described walking through the country and even participating in a game of basketball with some employees of the Hope Haven Center, a wheelchair manufacturing facility that the Club also collaborated with.

“Guatemala is a beautiful country,” Ham said. “I encourage you to visit and go on these trips if it’s possible – they’re a lot of fun and you can see where your money is going and what it’s doing all around the world.”