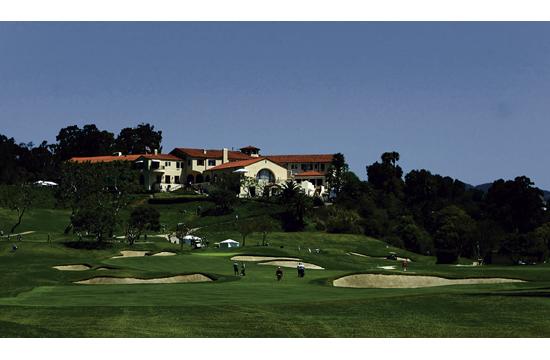 At the March 13 Santa Monica Rotary Club meeting, members had the opportunity to learn more about the weekly Rotary venue that they spend most of their Friday afternoons: the ever-so-familiar Riviera Country Club.

The Rotarians were cheerfully greeted by members Avo Guerboian and Julia Miele as they entered and were led into an invocation by Bret Carter, who recited an athlete’s prayer to complement the upcoming guest speaker’s sports-centric presentation.

Songs were crooned in unison with leaders Tom Larmore and Ken Waltzer at the podium.

After the usual announcements and guest introductions, guest speaker Don Emery, general manager of the Riviera Country Club, took to the microphone and elaborated on the history and background of the establishment.

“The Riviera Country Club serves as an intersection of Hollywood, sports, and the world,” Emery began as he presented the Rotarians with an informational slideshow and video about the picturesque venue.

Emery emphasized the significance of a “meshing of histories” and how “Hollywood, sports, entertainment, California, and Riviera history all intertwine.”

Due to the Riviera’s rich history that dates back decades, Emery was able to delve into the details of how the Pacific Palisades-based club provided the perfect location for tennis and golf enthusiasts against the backdrop of sunny southern California.

“We’ve had our tennis club since 1963,” Emery explained. “The Riviera itself was established back in 1926.”

Emery said that the Riviera is active when it comes to community outreach, which is a value that the Santa Monica Rotary Club shares as well.

“We do community outreach with the PGA Tour, the Women’s All-American Tennis Team, and the Riviera Tennis Foundation,” Emery said.

Emery expressed his appreciation for the relationship between the Riviera Country Club and the Rotary Club of Santa Monica.

“The Rotary Club of Santa Monica is a very important part of our community,” Emery said. “We wholeheartedly support their efforts not only in the immediate community, but also all around the world.”

The Riviera Country Club provides a variety of amenities and services. The establishment boasts a tennis facility and a golf course (on which the Northern Trust Open is held annualy). The Riviera’s ballrooms and banquet areas have hosted a number of weddings, birthdays, and other special events and occasions. The club also has several guest suites available and offers extensive culinary services as well.

For more information on the Riviera Country Club, visit therivieracountryclub.com.