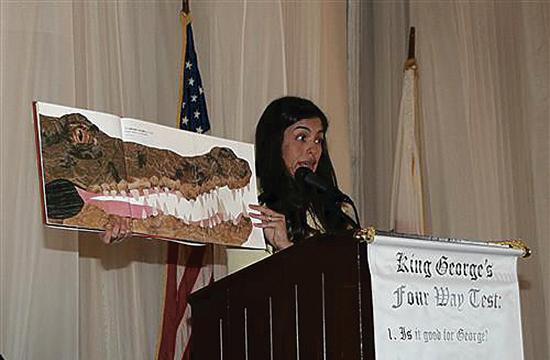 The Rotary Club of Santa Monica commemorated Literacy Day at its weekly meeting Friday, March 6, with the spotlight on children’s books. To kick off the meeting, Charlie Follette presented the Rotarians with an invocation.

After guests were introduced and announcements were made, Savi Labensart led the club with a special version of the hit song “Happy,” with the lyrics tailored to suit the theme of children’s literacy and prepare the members for the afternoon’s presentation.

Although Majd serves all patrons, she specializes in programming and outreach for children ages 0 to 11 and is contributing to finding, developing, and executing the library’s summer reading program as a part of the 2015 Los Angeles Public Library Summer Reading Program Committee.

Majd has been employed at several libraries and is adamant about advocating the importance of literacy and reading and encouraging children to become lifelong readers.

“As a children’s librarian and as one who likes to advocate reading, I was ecstatic when I learned that Rotary members took on reading to students at the Santa Monica-Malibu Unified School District,” Majd said. “I know that Rotary members are always taking action and contributing to communities, but I’m here to tell you why we are celebrating this particular venture that you have embarked on. In doing so I will discuss the dynamics of reading to children.”

Majd explained that several adult readers “do not realize the significant advantages that they are applying to a child’s life” by reading books aloud to them, including the impact of developing their literacy skills. From talking to writing to even singing and playing, the communication skills of children are sharpened when they are read to.

“Children learn our language by listening to others talk,” Majd said. “When you read to a child, you give them the opportunity to learn new words and what they mean. You take a role in them learning cues in our language, and you help them develop their own skill of reading for themselves.”

Majd said that listening to adults reading exposes children to learning the “English language code,” as they learn letters, names, and sounds.

Children can enhance their relational abilities through reading, according to Majd.

“Reading introduces children to book characters, which they may build connections with,” Majd said. “They learn new stories, thoughts, and ideas, [and] they gain new knowledge about the world on various topics when you read to them.”

One of the clearest results of reading out loud to children is the immediate impact on their academic performance.

“It’s been proven that kids who read tend to perform better academically and go on to colleges and universities,” Majd said. “Reading to children is the most effective way to turn them into lifelong readers, which they need to do if they want to be successful.”

Kids can build stronger senses of self-esteem and self-worth as well, as “kids who love books tend to have an easier time becoming self-starters rather than being influenced by their peers and mainstream media.”

After highlighting the myriad of benefits of reading aloud to children, Majd delved into a number of award-winning children’s books to provide a glimpse of what is popular in the realm of juvenile literature. Majd gave an in-depth description of the books, including the synopsis, publisher, author, and illustrator of each.

Majd concluded by elaborating on the various resources that public libraries provide for parents, caretakers, and volunteers with regards to children’s literacy.

“We provide booklets for grade and reading levels as well as reading advisories and recommendations,” Majd said. “We know exactly what they would like to read.”

In order to further highlight the importance of the Rotarians’ volunteer service, Majd said that one of her earliest childhood memories was when “The Giving Tree” was read to her.

“It was a major event for me and was what triggered me to become an avid reader today,” Madj said. “I want to commend the Santa Monica Rotarians and thank you for your leadership and committing to reading to children. I’m so happy you’re pursuing this venture and I think that you all should be celebrated.”