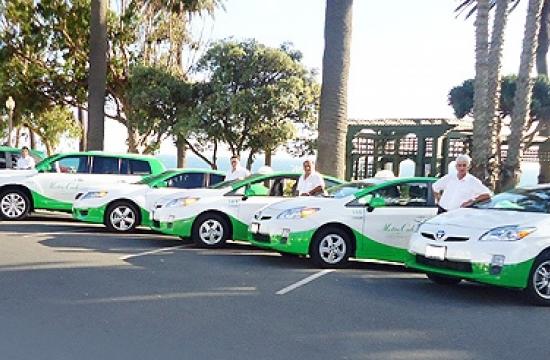 The future use of Santa Monica’s curb space and the vehicles currently vying for passenger pickups and drop offs were on City Council’s agenda Tuesday night as an allocated study session discussed how best the City make use of sharing the streets.

Curb space is considered a valuable resource in Santa Monica, and as Salvador Valles, Santa Monica’s Acting Chief Administrative Officer explained, with parking spots at a premium, any extension of curb space for use by ridesharing vehicles, referred to as transportation network companies (TNCs), would come at a cost.

Councilmembers, industry experts, and members of the public discussed at length the pros and cons of curb space allocation, including safety aspects and the consideration of drivers, users and pedestrians.

Highlighting the issue of added pollution and traffic congestion that TNCs cause while cruising around, Mayor Kevin McKeown said that the issue should be of the highest importance to the City.

Echoing McKeown’s statements, Councilmember Gleam Davis said that the City should be active in helping rideshare drivers find safe places to stop, suggesting the beach parking lots, while waiting for a ride.

“I would hope that we start looking fro non-curb space so they are not cruising around our neighborhhoods,” Davis said.

Curb space is limited and valuable, and is required for buses, bikes, passenger drop-offand pick up, valet, shared cars and bikes, bike parking, and loading and unloading of goods and services, according to the City.

“Curb space must be allocated thoughtfully and designed to ensure visibility and discourage people from using the space in unintended ways that impact adjacent traffic flow and pedestrian activity,” City staff said.

With both TNCs and taxis now using apps to hail rides, the distinction of curb-side pickups is becoming very blurry, Valles said.

Citing a recent report by California Public Utilities Commission, Valles explained that signing up via an app is not considered curb-side hailing, but with no time limits imposed by the Commission, an app user could in effect, hail a TNC or taxi in a matter of seconds from their phone.

TNC drivers are unlikely to take up too much time on the curb, said Councilwoman Pam O’Connor.

“It really is about supply and demand,” she said, explaining that TNC drivers are unlikely to linger for long if they are not making money.

In order to move forward on the issue, staff discussed the importance of giving City-regulated vehicles priority when it comes to curb space, without excluding competing vehicles. They recommended that council direct staff to, “include all forms of transportation modes when allocating curb space, with additional priority given to vehicles for hire that are subject to greater local control and/or directly support the guidelines outlined earlier in this report.”

The recommendation was passed unanimously.

The fate of taxicabs in Santa Monica was also high on the discussion agenda Tuesday night. Local taxicabs experienced a 27 percent reduction in trips in 2014 when compared to 2013.

With such dwindling numbers, and although it is not possible to know specifically the cause of the decline, the fall clearly coincides with the arrival of TNCs such as Uber and Lyft, according to the City.

Staff recommended that amendments to the taxicab franchise rules and regulations to address changes in the vehicle-for-hire market.

“Due to the disruptive nature of TNCs on the vehicle for hire market, it is necessary to examine adjustments to the franchise system before it is renewed,” City staff stated.

To determine what amendments should be brought forward in an ordinance, staff recommended and was directed to:

1. Evaluate the total number of taxicabs authorized to operate in Santa Monica.

3. Evaluate options to require taxicab companies to utilize a smartphone app to “hail” a taxicab.

4. Evaluate options to allow taxicab franchisees to dynamically adjust the number of

6. Evaluate establishing a two-year driver permit instead of a one-year permit.

7. Evaluate establishing either a driver permit fee that is pro-rated depending on the number of months into the permit year the application is filed or an rolling one yearpermit that is renewed annually on the original application date or other date such as the drivers birthday.

The recommendations passed unanimously and City Staff will “draft an ordinance to amend the taxicab franchise program rules and regulations that provide flexibility and adjust to the changing vehicle for hire market” no later than July 2015.

City staff will also return to Council with recommendations on franchise renewals and vehicle allocations no later than September 2015.

In-city vehicle for hire came under scrutiny as part of the study session. Currently, local law requires that a vehicle-for-hire company that operates solely within Santa Monica secure a business license; however, no other operational regulations exist.

Staff recommended that, “Council direct staff to draft an ordinance to eliminate the gap in vehicle for hire regulations…with guidance to establish minimal regulations to address public safety and circulation, such as an operating permit, minimal insurance requirements, and driver permits.”

Recommendations were passed unanimously and an ordinance will be drafted to amend the vehicle for hire regulations to establish minimal regulations on in-city vehicles for hire, consistent with State law no later than July 2015.