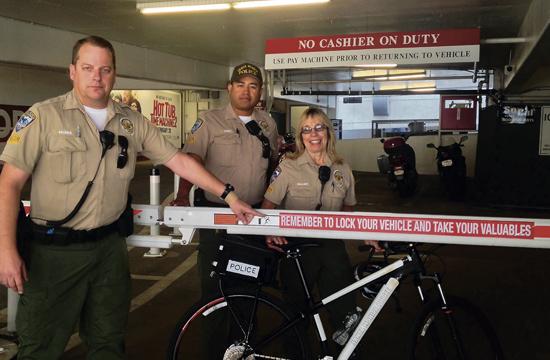 Santa Monica Police have issued a Citywide call for vehicle owners to be vigilant when it comes to locking their cars and keeping belongings safe. The move follows a 25 percent increase in vehicle break-ins and property theft in downtown Santa Monica in recent months.

Statistics comparing Jan. 1 – March 1, 2014, with the same period this year, show a significant jump in the number of thefts from vehicles in downtown Santa Monica. The area examined covers Wilshire to Colorado, from 7th Street to Ocean.

The department has upped the number of personnel assigned to patrolling the zone, with Public Service Officers (PSOs) focused on preventing such crimes of opportunity.

“You’d be surprised how many cars that we stumble upon that the door was actually open – the person was too busy and they got distracted and they left the door open – it’s an invitation to being victimized, because this is your property,” said Sergeant Rudy Camarena, SMPD.

In a matter of minutes Wednesday at Parking Structure 2, off 2nd Street, PSOs Carlton Palmer and Alex Gomez quickly discovered three unlocked vehicles on level one alone, all just waiting for a theft to happen.

The first car identified Wednesday at 11:20 am, had an open handbag brimming with valuable items: a purse, laptop, and cables, in plain view on the passenger seat.

The car was right next to the alley exit.

“A smash of the window would take less than 10 seconds and the purse would be gone,” Palmer said.

A few vehicles away, at 11:25 am, a van had the rear window half open with a trunk full of groceries and bags, also in plain sight.

Upon spotting a vulnerable vehicle, PSOs attach a handwritten notice to the car, alerting the driver of the danger of theft that they could easily be preventing.

“It’s not really hard to find,” Palmer added, moving towards a third vehicle that had its passenger window completely open, and bags and belongings on the passenger and rear seats.

The increase in crime is in part due to thieves taking advantage of such opportunities, the PSOs explained.

“They’re looking for an easy hit, an easy target,” Palmer said. “Trying to get into someone’s trunk is giving them too much exposure, but they can walk up to the door, pretend that they are unlocking it and just un pop the window in under 10 seconds, so it is a crime of opportunity.

“That’s what we’re trying to eliminate,” he explained. “The opportunity for a thief to get in and out with your personal belongings.”

Discovering cars with their engines running is also a common occurrence in Santa Monica, according to the officers.

“With these new high-tech cars nowadays, it’s a push button – you don’t even have to put a key in, it’s a push-start vehicle, so a lot of people will think that the car is off, their access card is in their pocket, the vehicle being locked, but it’s running. We come across that quite a bit too,” Palmer said.

High on the thieves’ and the PSOs’ target list are rental cars.

Complete with barcodes on the windows, rental vehicles are easy to identify and are prime targets.

“We want to make sure that these cars showing an obvious sticker are safe and secure,” the PSOs said. Wednesday’s walk proved otherwise – several rental cars had GPS’ attached via cables to the dash.

Interstate cars too had obvious luggage visible in the rear seats and a diplomatic vehicle, also a clear target, had personal belongings and bags on the back seats.

“What we want, is that all of these personal belongings be put in the trunk, so that people with illegal activity on their mind will look in and see the passenger side empty,” Palmer stated.

The PSOs routinely lock open doors and try to secure vehicles if they can.

The best advice, however, is for drivers to take valuables with them and lock all other items in the trunk.

As summer fast approaches, SMPD is hoping that the recent spike in thefts will stand as a stark warning for all to be increasingly vigilant.

For more information on how to prevent theft go to: santamonicapd.org.