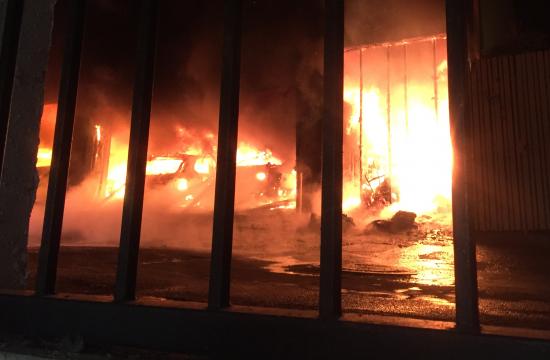 Two Santa Monica residents were able to escape their apartment at 828 15th Street without injury early this morning after a smoke alarm alerted them to a huge fire in the car parking port directly below them.

Clemo said the fire was extending to the second floor of the garden style apartment complex.

“(Firefighters) were also met by some challenges – there were downed power lines in the alley which they had to contend with in order to attack the fire, which they knocked down rather quickly, but it had extensive overhaul due to pack rat conditions,” Clemo said.

“The unit above the garage, Apartment F, was severely damaged from fire and displaced two residents who escaped safely due to a smoke detector. They are being tended to by the Red Cross for shelter needs.”

Clemo said the fire was knocked down in about 45 minutes, but not before the four vehicles parked in the car port were completely totaled.

“Our Fire Prevention bureau is currently on scene doing a dig out and trying to find the cause of the fire, and also taking statements from the residents and nearby neighbors.”

Neighbor Mark Kapczynski, who lives across the alley at 831 14th Street, said he started to hear a sequence of loud bangs at about 4 am.

“I initially thought it was gun shots as it was followed by some screaming,” Kapczynski said. “I ran outside to our courtyard – and saw the flames and smoke coming over our building. I ran to the back side of our unit to the alley through our garage and saw all of the flames.”

“We had some minimal roof damage and broken windows,” he said.