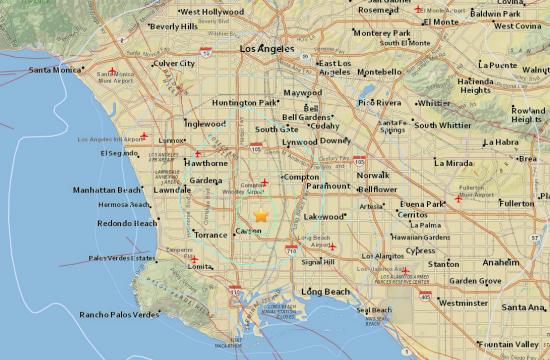 A magnitude-3.4 earthquake rattled parts of the Los Angeles area this morning.

The temblor struck at 7:01 a.m. at a depth of slightly more than 7 miles, it’s epicenter 2 miles east-northeast of Carson and 3 miles south-southwest of Compton, according to a computer-generated report from the U.S. Geological Survey.

Residents reported feeling some shaking, but there were no immediate reports of damages.

Seismologist Lucy Jones said in a tweet that the quake occurred very near the Newport-Inglewood fault, south of where there was a quake on April 13. That fault extends nearly 50 miles from Culver City to Newport Beach.

The 1933 Long Beach earthquake, which had a magnitude of 6.4, took place along the Newport-Inglewood fault, causing widespread damage throughout the Southland and killing 120 people. As a result, the California Legislature passed the Field Act, which mandated that school buildings be made earthquake resistant.

The Los Angeles Fire Department, as is customary following an earthquake, went into “earthquake mode,” which means firefighters at all stations go out into the field and look for possible damage, said LAFD spokesman Erik Scott. Nothing of any significance was found, Scott said.