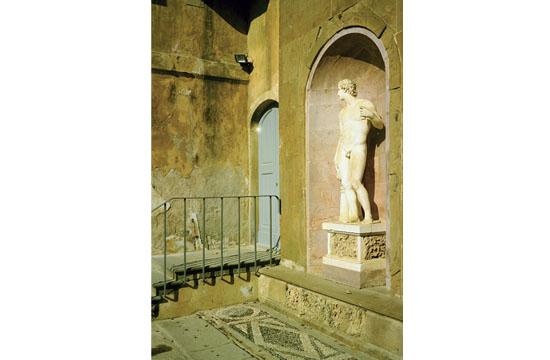 This Saturday, April 11, bG Gallery presents an eclectic group show titled “As Above, So Below.”

Gallery director Om Bleicher said photography is a new medium for the gallery that has now become one of its focuses.

Gualtieri is an architectural and interiors photographer by trade who divides his time between L.A. and the Tuscan countryside.

The Italian-born artist said he tries to spend 3-4 months in his Tuscany studio. He studied visual art in Italy, which led him to photojournalism, commercial photography, and fine art.

“I will be showing two photographs from Italy: one is a detail of the Buontalenti Grotto in the Boboli Gardens of Florence, and the other one is a view of a stormy ocean from the Marina di Pisa waterfront in Tuscany,” he said.

Gualtieri explained that both photos are from a series called, “A Story Told Twice.”

“This set of photographs was made to reconnect myself with the place where I grew up. I was looking to create sort of a backdrop – theatrical scenery if you will – for what will ultimately be the tale of me,” he said. For more information on Gualtieri, visit marcogualtieri.com.

Photographer Scott Tansey has previously shown work at bG Gallery. He most recently had a photo in the G2 Gallery/Pico House exhibition titled “Earth Month Los Angeles,” which is currently on view at the Pico House in downtown Los Angeles.

Tansey said he most recently returned from a photography trip to Acadia National Park as part of a Fall Color Workshop given by John Paul Caponigro.

“I had recently completed a huge five-year project taking panoramic images of Los Angeles, which is my home town,” he said. “ It was time for a change, and I needed a creative spark to do something different.”

Tansey said he had taken a previous workshop given by Caponigro that changed his photographic direction.

“I seem to be going through a growth spurt with my images and making them more personal,” Tansey said. For more information on Tansey, visit scotttanseyphoto.com.