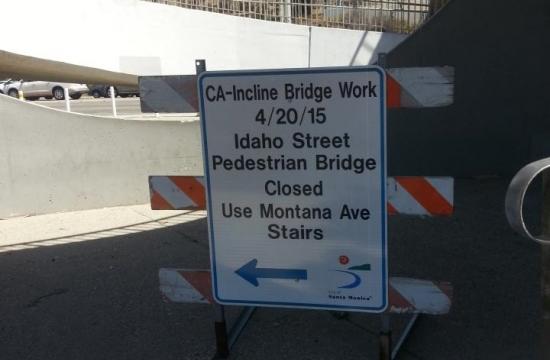 Crews posted “no left turn” and “road closed” signs on the California Incline early today, as commuters who use Pacific Coast Highway readied themselves for 14 months of increased traffic woes they fear as a result of the reconstruction of the aging bridge.

The City of Santa Monica has put flashing signs as far as 25 miles away, in Agoura Hills, warning commuters from Thousand Oaks and beyond that PCH will be extra-congested starting Monday morning.

Although traffic was still allowed to go up and down the incline between PCH and downtown Santa Monica at 7 a.m. today, some drivers appeared confused by the road closed signage that was installed at dawn.

About 13,000 cars per day use the California Incline to access PCH from downtown Santa Monica, or vice versa. The traffic count on PCH is 80,000 cars per day, and the closure will mean a crunch on the coastal road at two places: the complicated traffic signals at Chautauqua Boulevard/West Channel Road/Entrada Drive, north of the incline, and near the Santa Monica (10) Freeway terminus at the McClure Tunnel.

Santa Monica officials are hoping to detour coastal traffic over to the Lincoln Boulevard interchange, and around likely bottlenecks on the Ocean Avenue and West Channel Road alternatives. The Ocean Avenue ramp deposits vehciles into a Metro Expo Line construction zone, and Entrada is already overloaded between PCH and Santa Monica.

But the Lincoln signal is already overloaded as cars back up from the Expo Line construction project, and rear-end crashes on the 10 Freeway are so common that the city has installed flashing warning signs there, too.

The California Incline is a two-block-long bridge that carries traffic up the side of a cliff, was built in 1930, and is falling apart. Santa Monica officials are worried about earthquakes or landslides, and plan to demolish the old bridge, shore up the cliffs, and build a new incline that looks like the old one.

Santa Monica engineers have said the project may actually partially ease traffic jams on PCH, because the signal on PCH at California Incline will not turn red to PCH traffic during the 14 months or so of construction.

But Malibu city officials fret that the three other major road projects in Santa Monica will cause a severe crunch on PCH.

A City of Los Angeles sewer project is still blocking 2 or 3 lanes of PCH just north of the California Incline, depending on each day’s work schedules. That project is more than two months over its schedule, and was supposed to be finished before the Incline was closed.

It will now block PCH lanes until about July 1.

Residents in the city of Los Angeles, who live along the narrow Entrada and West Channel drives, fear lonmg lines of day and night traffic as people seek to get to and from the ocean.

“Santa Monica Canyon is going to get hammered more than anybody else,” observed resident George Wolfberg in an interview with the Santa Monica Observer. “When Santa Monica sneezes, we get pneumonia.”