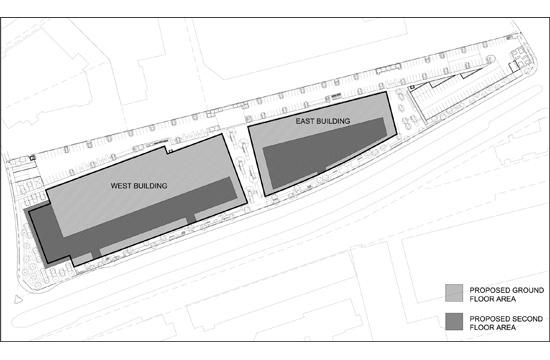 The empty Paper Mate building, sitting at 1681 26th Street Santa Monica, and previous location of the proposed community-dividing Hines Project, has a new owner and with that, a new plan moving forward.

Lincoln Property Company has recently been engaged by current owners Clarion Partners to transform the vacant building into boutique creative office space. Adaptive reuse plans for the project have been filed with Santa Monica City and are awaiting administrative approval.

The concept hopes to attract high-quality jobs while embracing the character of the evolving Bergamot neighborhood, according to Lincoln Property Company’s Senior Vice President Rob Kane.

The adaptive reuse project will meet the needs of the City and achieve its clear goals for the site without expanding the footprint of the existing vacant building, Kane said.

“The project will meet baseline standards for a Tier I, by-right development as established in City planning documents, including the LUCE and the Bergamot Area Plan, subject to design review by the Architectural Review Board and review under the City building permit process,” Kane explained.

“The design for the site will complement the look and feel of the Bergamot area and exemplifies a well-planned transit-oriented development, especially given the site’s proximity to the expanding Expo Line,” he added.

Staunch opponents to the previous Hines project slated for the location are welcoming the new direction.

“Adaptive reuse of the Paper Mate site is the best community benefit we have seen from this property,” said local community group Residocracy’s founder Armen Melkonians.

“It far outweighs all of the community benefits that our City Council negotiated with Hines when they approved the original 766,000 square foot project,” he said.

Melkonians lead a residents’ charge after the mixed-use project by Hines was approved by City Council in February 2014. City Council repealed their decision in May 2014 following the submission of a 13,500-strong petition from Santa Monica residents.

The project will also see the addition of a one-story subterranean parking structure and the demolition of the easternmost existing building on the site. The parking structure includes two elevators, two exit stairs, shower and toilet room, and bicycle storage. The proposed parking structure will be located where there surface parking now exists.

Councilwoman Gleam Davis agreed, stating that it is a tragedy that there will not be 500 units of housing, including affordable housing and housing for seniors and the disabled, at the location.

“I also am sorry that we will not have the fine grain streets and additional open space that would have made the area so much more pedestrian friendly,” Davis said.

“As I understand it, this proposal will be 100 percent commercial and have about 750 parking spaces with none of the trip caps or other significant traffic management requirements we negotiated as part of the proposed development agreement,” she added.

By-right adaptive reuse projects in Santa Monica are not required to conduct traffic studies, Kane explained, adding that his company is, “actively developing a transportation management program that will promote many strategies to reduce trips, including use of the Expo Line’s Bergamot Station just a few steps from our site.”

“This project will produce more traffic than the previous proposal,” O’Day said. “Residents will rue the day they believed the promises made by referendum leaders, not one of whom engaged to improve this new project, provide housing or reduce traffic impacts.”

“Our regional neighbors will wonder what happened to our principles when they visit the Bergamot area on the Expo Light Rail,” he added.

Davis agreed that it is a sad state of affairs that the economics of the project probably guarantee that the building will remain 100 percent commercial for at least 15 or 20 years.

While the project will not provide housing, it will also not impact the neighboring community with over 7,000 car trips or 4,000 people arriving at the corner of 26th and Olympic each day, according to Chair of the City’s Recreation & Parks Commission, Phil Brock.

“The impact on our community and the greater regional area will be less than if the Hines project had been okayed,” Brock said. “While I would have preferred to see housing at that corner, the glitzy Hines project offered too many offices, too few housing units, too much congestion, and too little parking at a great cost to our community.”

Lincoln Property Company said that they are looking forward to bringing new life to the underutilized and deteriorating property.

“The project will reduce the existing massing into smaller components and provide boutique creative office space, with an architectural design consistent with the industrial character of the Bergamot district,” Kane explained.

The pedestrian experience will be enhanced with a landscaped plaza at the corner of 26th Street and Olympic Boulevard, within close proximity to the Expo Line station, according to Kane.

Architects are also planning to incorporate environmentally friendly infrastructure and technologies throughout the project.

A hidden benefit of the revised project is a requirement that City staff and City Council now must reconsider and downsize the approved Bergamot Area Plan, according to Melkonians.

“The approved plan [Hines] foolishly and heavily relied on the construction of the Nebraska Avenue extension and two new cut through streets to Olympic Boulevard through “private property,”” Melkonians explained. “With these improvements now not being constructed, I believe that the Bergamot Area Plan fails to meet its goals and objectives and should be reconsidered and downsized.”

City staff is currently analyzing the new plan with a decision expected at the end of this week.