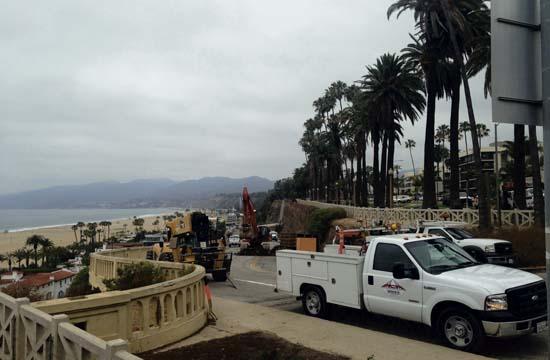 Despite months of hype, fear, and predictions of complete traffic chaos, the one-year closure of the California Incline that began Monday amounted to, not much at all. In fact Santa Monica’s streets were and continue to be seemingly quiet, with traffic flowing freely, even during peak hour.

An almost-empty Ocean Ave. greeted an array of news-vans and media Monday morning, all hoping to catch Santa Monica in interminable gridlock.

The reverse was the case.

At 8:45 am Monday, April 20, Ocean Avenue was almost empty. Alternate Incline-route Moomat Ahiko Way had less than three cars at any one time lined up at the traffic lights and PCH was moving freely.

Fears that the evening peak hour would be worse were also averted, as traffic was actually less than usual.

Santa Monica residents noticed the ease in traffic as far back as Montana Ave. Monday, with long-term neighbors reporting a quiet calm that had descended on the area.

“I have never seen Montana so peaceful and still,” commented eight-year resident Phyllis Weiss. “I thought that the apocalypse had happened, there were almost no cars, anywhere.”

“It went from bumper-to-bumper traffic getting worse every day, to nothing – overnight,” Weiss said.

The extensive proactive outreach effort of the City is doing its job, according to Stephanie Sweeny from the Outreach Team of the City of Santa Monica, with residents taking up the detours and planning their trips ahead of time.

“I think that it has definitely paid off,” Sweeny said. “We haven’t really seen any traffic jams, the traffic is running much smoother than usual.”

The City was very diligent in its community outreach effort regarding road changes for the Incline closure, according to Sweeny, with the traffic management plan thoroughly thought through.

“Detours are being followed,” Sweeny said; with residents reporting an improved traffic flow in many areas, due in part to the removal of the traffic lights at the base of the California Incline and PCH.

The fear the Santa Monica Canyon would become carmaggedon has also been allayed, the City receiving a letter from the Canyon Neighbors stating that they are pleased with the traffic situation thus far, according to Sweeny.

The City will be making a few tweaks to the current plan however, responding to calls for an improved pedestrian flow at California Ave.

Real-time technology employed by the City makes such traffic management responses quick and effective, according to Sweeny, with sensors, changeable message boards, and monitoring and adjustment methods readily available.

“It’s real time information,” Sweeny explained, with City staff constantly monitoring the roads. “As soon as they see a gridlock or traffic jam, they can immediately notify the construction management team and contractors, and they can then instantly make the required changes.”

The closure of the California Incline is anticipated to take 12-14 months.

A joint project of the City of Santa Monica and California Department of Transportation (Caltrans), the reconstruction effort will see the Incline meet current seismic standards and improve vehicular, bicycle, and pedestrian use, according to the City.

The project entails demolition of the existing bridge and the construction of a new bridge at the same location.

“The new structure will include a wider sidewalk and bicycle lanes. The north and south ends of the incline will remain a three-lane roadway that terminates at a signalized intersection,” the City stated.

The new bridge will consist of a pile-supported reinforced concrete slab structure with a width of 52-feet, an increase of 5-feet 8-inches over the existing structure.