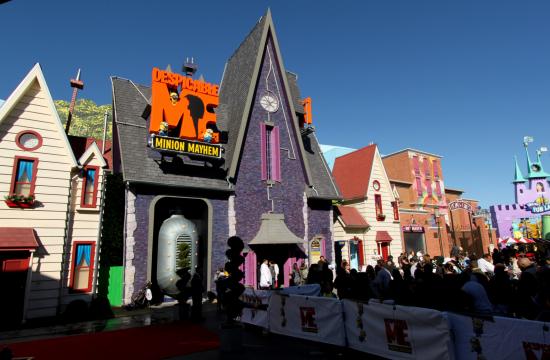 A man shot and killed himself at the Universal Studios theme park Friday  afternoon, near a restaurant where a former girlfriend works as a waitress, a sheriff’s lieutenant said.

The shooting happened near the Despicable Me Minion Mayhem ride, but it was unclear if anyone witnessed it because it took place in a secluded  area.

The woman called security officers about 2 p.m. after seeing her ex- boyfriend near Mel’s Diner, where she works, said Lt. Eddie Hernandez of the Los Angeles County Sheriff’s Homicide Bureau.

The man, who was about 30 years old, was the subject of restraining orders prohibiting him from contacting the woman, Hernandez said.

The security officers contacted the sheriff’s department and deputies responded, talked with the woman then began looking for the former boyfriend, Hernandez said.

A deputy found the man in a secluded designated smoking area but when she asked him to stand up he turned away and pulled a gun from his rear waistband or back pocket, put the weapon to his face and fired a single fatal shot, Hernandez said.

County firefighters were summoned at 2:24 p.m. to assist the sheriff’s department on a medical call and were on scene in five minutes. The man was pronounced dead at the scene.

The deputy tried to talk the man out of hurting himself, Hernandez said.

The man, who has a child with his ex-girlfriend, had two restraining orders issued against him after a pair of incidents at the theme park, one in a parking lot where he allegedly vandalized the woman’s car and another, about a week ago, inside the park, Hernandez said.

In a statement, a park spokeswoman said the park remained open.

“We are working closely with law enforcement  and corporate security on this ongoing investigation,” the statement said. “The safety and security of our guests is always of the utmost importance.”

The park does not routinely put entering guests through metal detectors, but does check bags, Hernandez said.