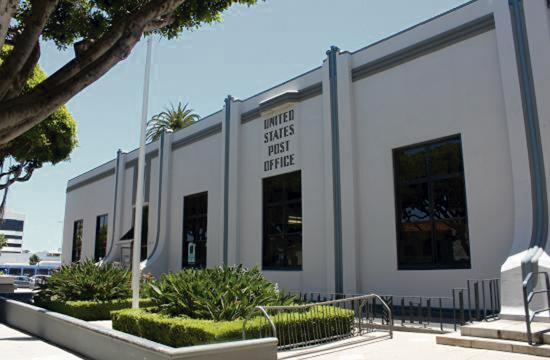 Given the public concern over the fate of Santa Monica’s historic post office and over the broader plans for reducing service – ending Saturday and door-to-door delivery, slowing the mail – Mirror readers were well served by Susan Cloke’s recent column on the U.S. Postal Service.

As she points out, the ‘financial crisis’ at the Postal Service is largely an artificial crisis, created by the 2006 congressional mandate that USPS pre-fund future retiree health benefits 75 years in advance.

And, as Ms. Cloke notes, the Postal Service isn’t necessarily making the best decisions in responding to the congressionally created red ink.

In fact, the full story is almost too strange to believe – but here are some of the facts.

Consider first how unfair the pre-funding mandate is. No other public agency or private company is required to pre-fund even one year in advance. Yet, the Postal Service has to pre-fund three-quarters of a century ahead, and pay for it all in 10 years. That annual $5.6 billion charge is the red ink.

Absent that, the narrative would be of an agency that without a dime of taxpayer money, and facing a still struggling economy plus the challenges posed by the Internet, is profitable.

That’s because, despite the conventional wisdom about a Postal Service reeling from the loss of mail to the Internet, USPS is in the midst of a strong financial comeback.

It had an operating profit of $1.4 billion in fiscal 2014; already in fiscal 2015 the black ink has reached $1.4 billion. Why? As the economy gradually improves from the Great Recession, first class mail revenue is once again rising. And, as folks in Santa Monica and elsewhere shop online, package revenue is skyrocketing – making the Internet a net positive, which augurs well for the future.

And yet, in a classic display of chutzpah, having created a fake financial crisis, some members of Congress proclaim that the responsible response is to degrade services to the public: make people traipse around the neighborhood to find ‘cluster boxes’ and deprive small businesses open weekends of the ability to get their checks on Saturday.

And the Postal Service itself contends that slowing the mail is the path to improved finances.

Here’s the problem with that ‘logic’ – the red ink isn’t due to postal operations and networks, which are increasingly profitable. It’s due to congressional meddling and politics.

Moreover, reducing services not only hurts seniors, rural residents, entrepreneurs, urban dwellers and others – it hurts the Postal Service itself. Making the mail less convenient and less accessible will drive mail – and revenue – away, sending USPS, which funds itself by earned revenue, into a downward spiral.

That, in turn, would stop the postal turnaround in its tracks, leading to a second manufactured crisis. And it would cost jobs. The $1.3 trillion national mailing industry, which is based on a robust, six (and increasingly seven) days-a-week delivery network, employs 7.5 million Americans in the private sector, including 966,901 in California (most of any state).

Meanwhile, 6.3 million people are employed by California’s small businesses, which would see their costs go up if compelled to pay expensive private carriers to receive their checks on Saturday.

The Postal Service, based in the Constitution, is particularly critical to a large and diverse state like California with so many small towns, remote areas and urban centers. It’s the nation’s largest employer of military veterans, and letter carriers enhance both neighborhood and homeland security. Under a plan created by President Bush after 9/11 to protect metropolitan areas from a potential bio-terrorist attack, and expanded under President Obama, on a volunteer basis letter carriers have stockpiled and trained to deliver medicines to every household in several major population centers – including in California – within 48 hours of an attack.

Californians should press their representatives in Washington to take a common-sense approach – preserve and strengthen the now-profitable postal networks, while addressing the onerous pre-funding mandate.

Then the Postal Service can continue providing Americans with the world’s most affordable delivery network.

Fredric Rolando, president of the National Association of Letter Carriers