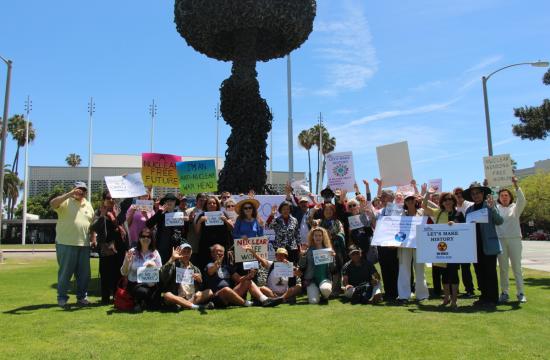 “Global Wave for a Nuclear Weapons Free World”, a rally to advocate for a nuclear weapons ban treaty, took place in Santa Monica on Sunday as part of a series of actions occurring sequentially, time zone by time zone, around the world prior to the 2015 Nuclear Non-Proliferation Treaty (NPT) Review Conference.

A key provision of the NPT, which has been signed by 190 countries since it came into force in 1970, requires that all signatory nations move in good faith towards complete disarmament.

With stalled progress on that obligation, and plans by the US, Russia, and other countries to modernize their arsenals, many nations and advocates are looking at alternate vehicles to eliminate nuclear weapons.

Support for a nuclear weapons ban treaty has been grown steadily in recent years. Since the last NPT review conference in 2010, 155 nations signed a Joint Statement on the Humanitarian Consequences of Nuclear Weapons, and 70 countries have indicated support for a ban.

Pope Francis also recently joined in the call for a legal prohibition on nuclear weapons. Advocates point to precedence for such a ban in bans on biological and chemical weapons, land mines, cluster munitions and other indiscriminate weapons of war.