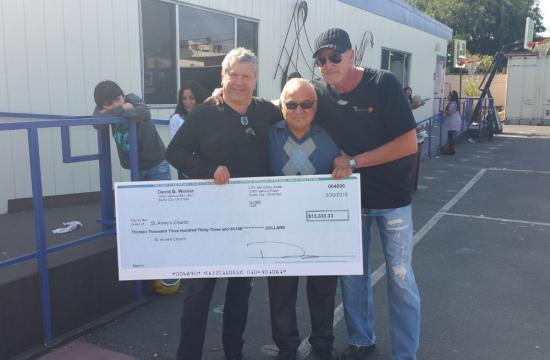 The generosity of a Las Vegas man who goes by the nickname “Robin Hood 702” and restaurant partners RAO’s and Tender Greens hosted an Easter dinner for the needy and less fortunate in Santa Monica on Sunday.

From 3 pm to 6 pm, St. Anne Catholic Church & Shrine at 2011 Colorado Ave. hosted the dinner that was free and open to the public.

About 150 people attended the event, including representatives from Santa Monica Fire Department.

“The Fire Department welcomed and embraced the event,” Robin said. “Battalion Chief Michael McElvaney showed up and brought four firemen with him. Usually at the station they have families come to them on Easter when they aren’t on calls, but he said they really wanted to come out and support the event.”

Robin said he invited the Police Department, but they declined the invitation.

“I decided I wanted to feed not only the needy, but the Police and Fire departments as I thought it was important to show my appreciation for all the things law enforcement do around the country,” he said. “Law enforcement around the country have been getting a bit of a battered reputation, so I was trying to bring the community together to get people to see police officers and firefighters are our friends.”

During the event, businessman David Weiner presented the church’s deacon with a check for about $13,333.33.

“He was a Jewish guy trying to show it doesn’t matter what religion you are,” Robin said. “He told me, ‘I want to be the one Jew that contributes for the sake of the community and support St. Anne’s,’ which is a Catholic and Christian church.” Robin said Weiner planned on handing out more checks to community organizations.

Robin said he wanted to thank the restaurant partners who catered the event.

“They cooked enough food for 600 people,” he said. “I really want to thank Frank Pellegrino Jr. from RAO’s and Erik Oberholtzer from Tender Greens for making this happen. They both said it was a pleasure to do this for the community.”

For more information about the church, visit www.stanneshrine.org.