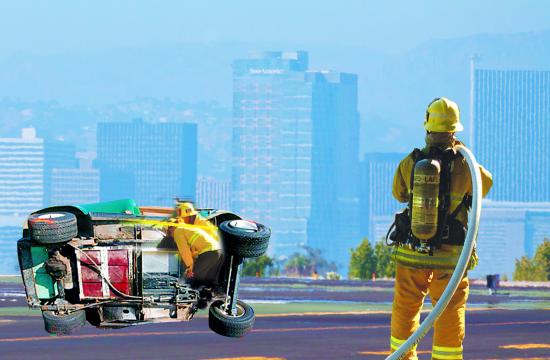 A runaway golf cart from Penmar Golf Course crash-landed safely at Santa Monica Airport during the course’s annual “X Games of Golf” over the weekend. The driver, Jack Par of Marina del Rey, walked away from the accident declaring his safe landing “very ‘Fore!’-tunate.”

On Saturday, competing teams at Penmar raced golf carts over a quarter-mile obstacle track that concluded with a 200-foot ramp jump over a sand trap. Par said he “came in too hot” on the ramp and was launched out of the course and onto a runway at nearby SMO.  Par insists he tried to steer the cart away from landing on nearby homes, but that a “healthy” intake of Red Bull just before his attempt “totally baked” his sense of navigation.

Following the crash, an organization of Penmar neighbors calling itself “Stop Cart-tastrophe!” held a press conference and stated that the time has come for the city to take action against the golf course, which has also been the source of expensive putters being hurled by angry golfers onto nearby lawns after missing a putt. The “putter rain,” as suffering neighbors call it, is often accompanied by streams of profanity describing physically impossible biological acts involving the putter and a golf ball.

Penmar officials say they will look into eliminating the “Cart-Off” event from the annual X Games and that they continue to investigate claims that the “Golf Ball Bazooka” portion of the competition has resulted in sea gull deaths.