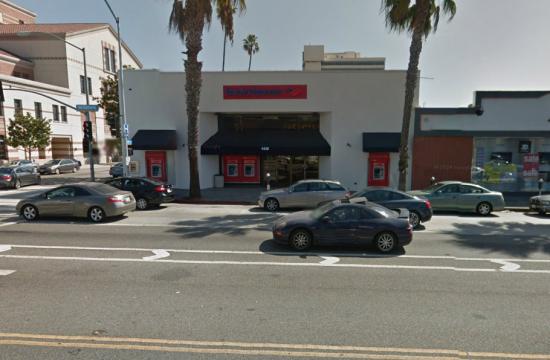 A once-convicted bank robber was arrested after a failed attempt to rob a Bank of America branch in Santa Monica, authorities said.

The attempted robbery at the B of A branch at 1430 Wilshire Blvd. took place about 9:25 am Saturday, according to SMPD spokesman Sgt. Rudy Camarena.

The suspect, 39-year-old Grenville Robinson, allegedly walked into the bank and handed a teller a note demanding $3,000 and said he had a gun, according to Camarena. When the teller hesitated, Robinson left the bank without getting any cash and was arrested as he exited.

Police recovered the demand note but no gun was found, Camarena said.

According to Camarena, Robinson had previous arrests in Oklahoma and Alabama and was convicted in 2004 of bank robbery. Camarena did not say in what state he was convicted.

Robinson told police that he was currently homeless. He was booked on a robbery charge, according to SMPD records. He is currently being held in lieu of $50,000 bail, according to L.A. County jail records.