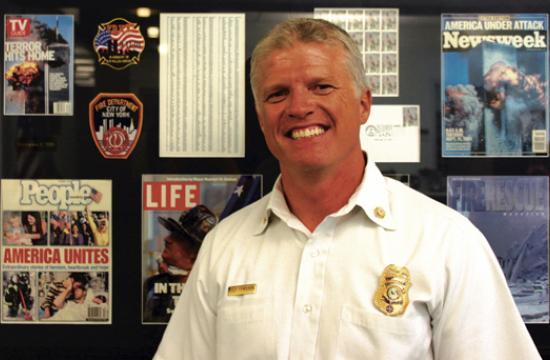 Following five years at the helm of Santa Monica Fire Department, Fire Chief Scott Ferguson will hang up his City hat May 10 before embarking on a new role as Fire Chief of the Riverside County city Murrieta.

With a population just over 105,000, and nestled between Temecula and Wildomar, the semi-rural Murietta will afford an easier way of life, according to the Chief.

“My third grand-baby is expected to arrive in a little over a week; and the first two are more familiar with me on Facebook and Skype than they are in person,” Ferguson said. “That has to change; and truthfully, Murrieta is facing its own set of pretty cool challenges.”

With Expo on the horizon, alongside the construction of a new fire station, and upgrades to Fire Station 2 and the training facility, if Ferguson and his wife had waited for things to calm down a bit in Santa Monica they might as well have picked out a nice retirement spot, he explained.

“Council recently granted the department six new personnel and foreshadowed an additional half dozen during the next budget cycle,” Ferguson said. “After having graduated seven this Saturday, this will ensure that we have two more fire recruit academies over the next 12 to 18 months. There is more – Santa Monica is a happening place – we will be back often to see how it progresses.”

Ferguson was appointed to his current role in March 2010 following a 30-year career. He served as the Los Angeles Area Fire Chiefs Association (LAAFCA) President, represented the Association’s Federal Homeland Security Grant interests, and acted as liaison to the Regional Training Group, according to the City.

During this time, he supported area special operation teams and created a virtual network of SMART classrooms, thereby enhancing regional partnerships through training and safety programs.

Looking back on his five years in Santa Monica, Ferguson added that full credit goes to his colleagues when listing achievements.

“There is not a single change, project, or advancement that I can lay claim to having managed by myself,” the Chief explained. “The Department has continued to build on the strong reputation for excellence in the region.”

Highlights of his tenure in Santa Monica, according to Ferguson, include:

— Under the guidance of Deputy Chief Davis the Department achieved an ISO Class 1 rating, began designing new Fire Station 1, and worked side-by-side with other stakeholders to bring light rail to the community.

— Fire Marshal Binder is managing a team that is inspecting more buildings and processing more plans and permits than ever before.

— Local 1109 has been a close partner as the Department has begun to assess the need and deploy more resources to deal with a rapidly increasing call volume.

— The greatest achievement is that the Department has worked together as a team to manage more challenges while proving the best possible customer service.

As for his successor, the new chief will have to embrace an understanding that things do not stand still in Santa Monica, Ferguson said.

“The demands are great, but if you invest your time, listen, trust and adapt, you will get far more out of the experience than you put into it,” he said.

Interim Santa Monica City Manager Elaine Polachek said the City has benefitted from Chief Ferguson’s leadership, fire expertise, and the integrity that is ingrained in his work during the past four years.

“He committed himself to his department, his colleagues, and our community,” Polachek said. “Scott will be missed and Murrieta is lucky to have him as their Fire Chief.”