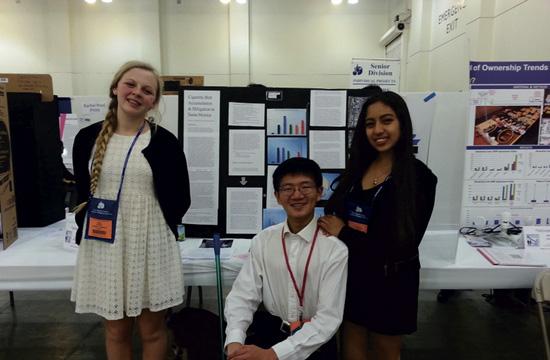 Bending down to pick up a final cigarette butt on the side of the road, three Santa Monica High School students end an afternoon’s worth of cigarette counting and collection. Samohi Team Marine members Martin Liu, Kimberly Fuentes, and Zoe Parcells went through this ritual for one day a week for 16 weeks last year.

It was all an effort to eventually alleviate the piles of cigarettes that will begin to form by the littering of tourists and city residents alike.

On Saturday, the three students were awarded first place at the Los Angeles County Science Fair for their dedication and hard work.

Many long, arduous hours were spent by them and others to count and collect a grand total of more than 40,000 cigarette butts from Santa Monica roads and beaches.

By accumulating a great deal of scientific evidence, Liu, Fuentes, and Parcells plan to encourage action at Santa Monica City Hall to improve cigarette cleanup around the city to save the environment they care so much about.

Their entry to the County Fair, “Cigarette Pollution and Mitigation in Santa Monica, CA,” was led by the three Santa Monica High School students with help from marine biology teacher Benjamin Kay, Professor Tom Belin of UCLA, Jeff Kirschner, who is the founder Literati, and Team Marine, a group of teenage students dedicated to protecting and fighting for the environment.

These students, with the help of their mentors, were able to conduct weekly cigarette collections in one-meter (3.28 ft.) strips at the side of the seven roads they surveyed by use of a process called a “two meter belt transect,” which ensured greater reliability of the data collected. They also performed a storm drain collection and beach collections. According the report, “each street (Wilshire, Arizona, Santa Monica, Broadway, Colorado, Third Street Promenade, and Montana) was surveyed at one week intervals for four weeks during all four seasons with approximately two months separation time between seasons.”

The students collected a total of 40,699 cigarette butts, which were evenly distributed between the beach and the streets.

Some streets, like Broadway, accumulated the most cigarettes for every season but winter, while a stretch of Montana Ave. had the highest concentration with 117 cigarettes per 10 square meters (107.6 square feet). The most pollution occurred in the warmer months, according to the report, which was “likely due to optimal weather for city goers and visitors.”

The findings critique the city’s action with regards to cigarette pollution, while offering solutions and recommendations for further limiting the pollution.

Benjamin Kay, the Samohi teacher that oversaw the study, gave his views on what he wants to be done about the recent discoveries by his students.

“We would like to see the City Council enact a public smoking ban like Manhattan Beach did,” Kay said. “Bans are an effective way to significantly reduce pollution. We would also like to encourage the city to deploy catch basin screens that will prevent cigarettes from entering the ocean.”

The three students and Team Marine began this project to protect the environment, a goal for which Team Marine advocates.

“We chose to focus on cigarette butt pollution because we had noticed, in our everyday experiences and beach clean-ups, that it is a highly prominent issue,” explained Zoe Parcells, one of the students. “Littered cigarette butts are not only problematic because of secondhand smoke and unsightliness, but because their plastic filters add to our already alarming accumulation of plastic pollution. It is negatively impacting our people, birds, seals, dolphins, fish, and other marine life.”

Team Marine’s cigarette study took a great deal of commitment and effort, from recording cigarette counts to making charts and tables, even when regular life got in the way.

“Picking up cigarettes for hours is never pleasant, but it needed to be done,” Parcells said. “Throughout the study, it was challenging to overcome time constraints and unexpected complications; such as sickness, a huge history test the next day, et cetera. We overcame these by always having each other’s back and trying to work efficiently.”

For Fuentes, Parcells, and Liu, as well as the rest of Team Marine, a year of hard work and dedication definitely paid off with their recognition at the Science Fair.

Parcells said after finishing the project and winning the fair, she felt like she could finally exhale.

“Even if we hadn’t won, I would’ve been proud of the work we’ve done, but it was amazing to have it validated,” she said. “But, I also realize that we aren’t really done until the issue of cigarette butt pollution in Santa Monica is resolved.”