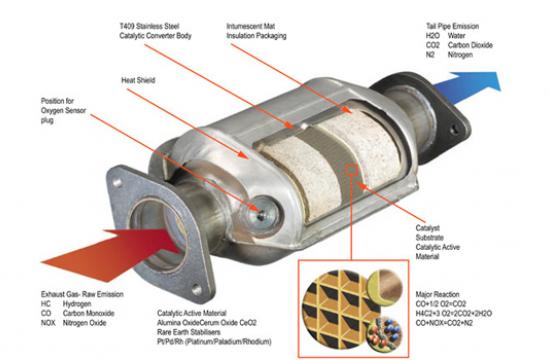 What is a catalytic converter?

Santa Monica police say theft of converters has become popular because of their value, relative ease to steal (unbolt or cut out), and their lack of identifying markings. The lack of identification makes it difficult to identify victims and successfully apprehend and prosecute criminals.

Police say the thefts are taking place during the early morning hours, targeting vehicles parked curbside. They target trucks and sport utility vehicles for this type of theft due to the vehicles’ height, which allows easier access to the undercarriage.

It takes less than five minutes for a criminal to remove the component using a battery operated power saw.

Tips on how help prevent your catalytic converter from being stolen:

The number one way to protect your vehicle’s catalytic converter is to park your vehicle(s) inside a garage or in a secure side yard.

If you must park your vehicle in the driveway, motion detector lights or continuous lights illuminating your driveway will be a deterrent. Also, getting a vehicle motion detector alarm might help.

Look for suspicious people and vehicles in your neighborhood. If you see a suspicious person under a vehicle, chances are they are attempting to steal the catalytic converter.

Educate your friends and neighbors about catalytic converter theft so they can be a look-out too.

Anyone with information regarding these thefts is urged to contact the Santa Monica Police Department’s non-emergency number at 310.458.8491, or to dial 9-1-1 if witnessing a crime in progress.