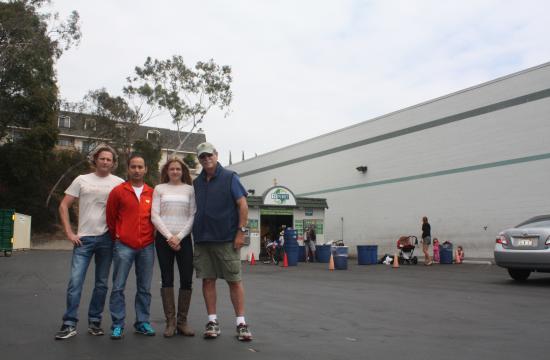 Faced with a never-ending background soundtrack of crashing bottles and crunching aluminum cans, residents on Ocean Park and Lincoln have had enough. They’re calling on Santa Monica City to put an end to the cacophony of smashing sounds and the increasing number of homeless people trekking to the area at all hours to cash in recyclables seven days a week.

Questions have also been raised by neighbors regarding the subsequent vanishing revenue stream from City coffers as bottles and cans go from City Council recycling bins to a private company.

Nestled next to the Albertson’s (soon to be Haggen) on Lincoln and Ocean Park, rePLANET recycling station offers cash for glass bottles and aluminum cans. While the business appears to be operating within its rights, neighbors say that they just can’t stand it any longer.

“We’ve been trying to cope with the noise as best we can,” said neighbor Tim Whitcome. “We’ve installed double-paned windows, we’re using headphones, white-noise machines, and loud fans, really anything that we can do to get by with the noise.”

Opening for business at 8:30 am every morning, rePLANET sees recyclers gathering at the center as early as 6:30 am.

They start trolling through local recycling and trash bins for bottles and cans at sunrise, with some working through the night under torchlight.

For new parent and direct neighbor Sean Gilbert, the noise of homeless people looping around the area, rifling through trash cans and knocking items over in front of his ground-floor apartment, is simply too much to handle.

“We have a new born child, who is a very light sleeper, she is constantly waking up,” Gilbert said.

“It’s a safety issue now and as a parent, with my first kid, it becomes extremely important to know that we can go out our back door,” he added.

According to the City, the California Beverage Container and Litter Reduction Act was passed in 1986 to promote and increase recycling of beverage containers in the state.

“The goal of the Act was to attain an 80 percent recycle rate of beverage containers by offering financial incentives for recycling and making it as easy as possible for the public to recycle,” the City said.

Small buyback centers were established statewide to address recycling requirements, according to the City.

With bottles and cans getting removed from City trash cans, it appears that recycling via rePLANET could also be draining potential revenue from Santa Monica City.

“It makes sense that that money should remain in Santa Monica so we can use it for programs for the homeless here in our own City,” Whitcombe commented. “We have our own recycling program – I would like to see the revenue captured.”

The situation is not unique to Santa Monica, with similar incidents reported across the U.S.; homeless people traversing across neighborhoods to cash in on recyclables.

According to Ocean Park/Lincoln residents, the number of homeless people coming into the area each day from different cities appears to be on the rise.

“I recently heard an officer interviewing a homeless person and he was stating that he had come from Skid Row downtown to Santa Monica because he heard that he could make money recycling bottles here at the recycling center,” Whitcome said.

The increase in homeless people has also brought new problems to the area with a fire on the grassy hill behind the recycling center, just feet from neighbors’ front doors, worrying the surrounding community.

“We had our mailboxes broken into recently by a homeless man who was trying to look for gift cards, so we had to replace all of those,” said neighbor and homeowner’s representative Tracy Bradley.

“There have been countless fights that we’ve had to call police to,” she added, explaining that the situation is getting out of control.

Long-time resident Richard Block agreed, he moved into the area in 1989.

“It’s gotten worse and is very bad now,” Block said. “In the last five years it’s escalated, not just the noise, but the long lines, fights, discussions outside.”

Block said that he has witnessed homeless people using portable toilet bowls outside the apartment building, with the situation as a whole creating an obvious urban blight.

Several years Block asked the City for some greenery and a sound wall to give the neighbors some privacy.

“It didn’t really go anywhere,” Block said. “Now the situation has gotten to the point where the whole building finds it intolerable.”

With sounds of smashing bottles amplified by the concrete wall behind the center and a seemingly-endless stream of recycling foragers on neighboring streets, residents said that the unbearable situation should be of highest priority for the City and are calling on City Council members to find a solution, soon.