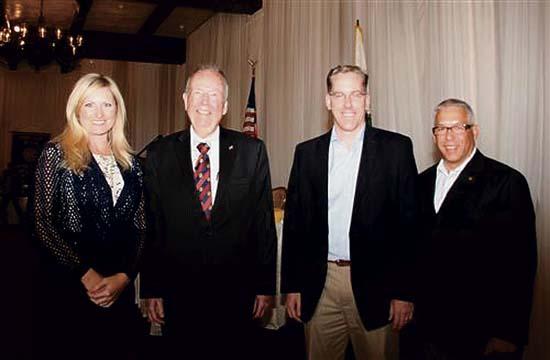 The guest speaker at last Friday’s April 17 Santa Monica Rotary Club meeting enlightened the Rotarians on a hot topic: the state water crisis. Although the issue is consistently in the news, speaker Matthew Fienup, who holds a master’s degree in economics from UCSB and is currently pursuing a Ph.D. in a relevant field, offered a unique mindset from the viewpoint of an economist.

After the usual invocation, announcements, and group songs, Fienup took to the podium after a brief introduction by Rotarian Avo Guerboian, who elaborated on the basics of Fienup’s educational, professional, and personal life.

“I’m here to discuss the economics of the water crisis,” Fienup said. “The extent of California’s water crisis is very well-known, but I can offer a perspective of an economist when it comes to the origins of the current crisis, some concrete solutions, and some examples of those concrete solutions that have actually been applied so that we have a practical way forward.”

Fienup commenced his presentation, which was supplemented with PowerPoint visuals and graphs, with a quote that embodied the theme of his talk: “nature creates a drought, but man makes a water shortage.”

According to Fienup, “our understanding of the current crisis really hinges on the quote,” so to further explain, he defined the meaning of the two terms.

“A drought is a lack of precipitation,” Fienup explained. “Two-thirds of our water is surface water or ground water, and a third of all the water in the state is snow-capped.”

Fienup went on to confirm the gloomy news: state water levels are “at record lows,” and “the situation is bad in terms of precipitation.”

Fienup continued to define “shortage” as an “imbalance between the supply of water and the demand for that water.”

Since the current reservoir levels are not up-to-par – although ironically this year’s levels are actually a bit higher than last year’s – they will plummet even more “as the dryer rest of the year” guarantees even less precipitation.

“The demand for water has not altered to accommodate the supply that we’ve had,” Fienup said, pinpointing the cause of the water shortage. “There is an over-demand of water, and we need to balance the lack of supply.”

According to the economist, the widely held statistics that 80 percent of California’s water goes to agricultural use whereas 20 percent goes to urban use is “deeply misleading,” as the water is in actuality split among three main uses.

“Any solution to this crisis must address environmental use, agricultural use, and urban use,” Fienup said. “Unfortunately, with the way the state water system is set up, we are almost guaranteed a shortage [due to the common pool problem]. We need some other mechanism.”

After providing examples that have proven to function – including a comparison to Australia’s water system – Fienup said that “adjudication, which is a cooperative legal process, is really the way to go,” emphasizing the power of teamwork.

“There are tools to be used within our existing state law,” Fienup said. “There are plenty of reasons to stay optimistic during this water crisis.”