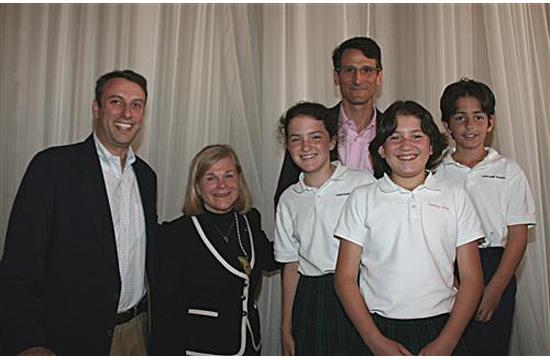 Last Friday, April 10, marked a special themed “Hobby Day” during the Santa Monica Rotary Club’s weekly meeting. After a prayerful invocation by Matt Williams, the club members collectively crooned “Take Me Out to the Ball Game” in honor of the recent MLB kickoff.

The meeting proceeded as a $2,000 grant was presented to KidUnity on behalf of the Santa Monica Rotary Foundation. Dee Menzies, head of Carlthorpe School, elaborated on the organization as a handful of fifth-graders were present to receive the grant.

“KidUnity on the Westside of Los Angeles is comprised of students from various schools who participate in activities that promote critical thinking, problem solving, communication, and collaboration, while emphasizing cross-cultural skills, global endeavors, teamwork, and certainly, civic leadership,” Menzies said. “It’s very much a service learning club, and I like to think of it as a mini Rotary club.”

One of the fifth-graders present at the meeting explained that the Westside club had recently focused on animal welfare, homelessness, and emergency preparedness.

Following the presentation of the grant, the hobby-centric theme of the meeting went into full force as guest speaker Amy Tan explained how one of her life hobbies eventually transitioned into a business in the form of her line, Amy Tangerine.

“Discovering this hobby started very young for me,” Tan said. “I grew up in Chicago as an only child to two immigrant parents, and I had a big imagination, so I found myself being bored a lot. My parents encouraged me to go do or make something.”

Fast forward to Tan’s high school years: the creative mind found herself in a sewing class during her senior year and wound up creating not only her own prom dress, but a friend’s as well.

“I made her this mermaid-like, satin dress that she wore and loved,” Tan said. “That was my first taste of success, my first experience at finding joy in creating something and having someone else benefit from it, too.”

Tan initially attended Georgia Tech with the intention of majoring in industrial design.

“This experience really pushed my creative boundaries, because after working on some 10-hour projects, I would show off my creation and only earn a B or a C,” Tan said. “I was dismayed because I thought creativity didn’t have to earn a grade.”

During this time, Tan was still making clothing for her friends on the side and gained experience in learning to take orders from clients. Tan eventually transferred to a different college to focus more on fashion.

“With more time on my hands, I felt like I should be doing something more with my life,” Tan said.

Due to circumstances that required her to work outside in cold weather, Tan had learned to make arm-warmers for herself. Through a serendipitous situation, a retail store caught sight of her arm-warmers, discovered that Tan had made them herself, and asked to place an order from her.

“The arm-warmers started selling very well at the store,” Tan said. “Magazines started doing pieces of my work and of my story, and it all started building from there.”

Although Tan initially took an arbitrary first few steps – she started to design tank tops on a whim – her creations were sold at luxury prices through the connections that she had.

“Cindy Crawford actually wore one of my tank tops,” Tan said. “My first thought was: ‘she’s working out in a $110 tank top.’”

After a successful trade show in New York, Tan launched a T-shirt business and moved to Los Angeles from Atlanta for another company as well. Through an ultimatum that her company gave her — to either stick with the official company or focus on her personal business — Tan began to reflect on her professional career.

“I realized that I had spent four years of my life working hard and building this business, and I didn’t have any time for myself,” Tan said.

As Tan turned 30, she entered into a self-deemed “third-life crisis” that led her to taking a mini sabbatical to Asia and discovering a brand-new creative means of expression: scrapbooking.

“I found so much joy in hearing about other scrapbookers’ lives and how they capture their memories,” Tan said. “I made a business out of it, but only just for me. I liked making albums for people who didn’t have time to do it.”

Tan’s creation has since been featured in major craft chains like Hobby Lobby, Joann’s, and Target.

“Once I learned to focus on appreciation instead of achievement, I was able to take the best of what I enjoyed and really make that my life,” Tan said. “Focus on what you love, and try to enjoy every minute of it. Build something that you’re proud of.”