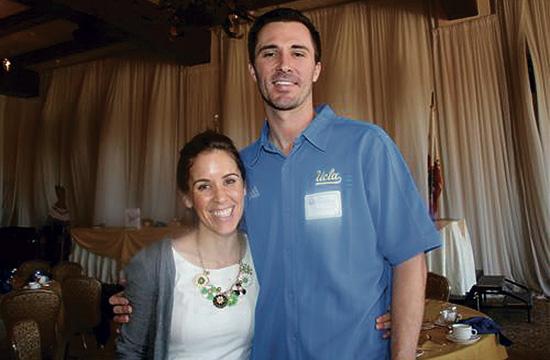 The Rotary Club of Santa Monica had the opportunity to become more acquainted with their fellow club members through the familiar Craft Talks program on Friday, March 31, during which Rotarians share with the rest of the club more details about their personal and professional lives.

With a humorous, yet reflective invocation by Jillian Alexander that jumpstarted the meeting, the Rotarians geared up to get to know members Abbey Fernandez and Adam Lichtl better.

Florida native Fernandez commenced the duo of Craft Talkers by outlining some of the most significant events in her life, including her passion for helping and mentoring students, her lasting interests in sports management and student athletes, her current job as a recruiter at Pepperdine University, and her relationship with her fiancé, Todd.

“I lived in Florida since my early childhood up until college,” Fernandez said. “I love Florida: it’s the perfect place minus the humidity.”

“I spent the five of the best years of my life at Clemson,” Fernandez said. “I lettered for four years and developed a huge passion for student athletes.”

Fernandez went on to attend Louisiana State University (LSU), where she not only earned a master’s degree in sports management but also met her current fiancé.

“LSU is a beautiful college town and it’ll forever hold a special place for us in our hearts,” Fernandez said.

Upon graduation, Fernandez worked with the women’s basketball team at the University of South Florida, a period she referred to as “the most challenging experience of her life.”

As an advocate for women in sports, Fernandez longed to keep the connection she built with students as she helped them figure out what they wanted to accomplish. The appropriate job arose at Pepperdine University where she could work with M.B.A. students and help recruit the best fits for the school.

“Pepperdine is the perfect place for me,” Fernandez said. “I was the top recruiter for the last year. I want to get into sports sometime in the future, but in the meantime, I’m very happy with where I am.”

Fernandez concluded by elaborating on her Rotarian roots.

“I have a huge heart for the older population, as I’m very close to my grandparents,” Fernandez explained. “My grandfather brought me into Rotary; I’m a fourth-generation Rotarian. It’s amazing that you can walk into any Rotary Club and instantly feel welcomed.”

Lichtl, who took the stage next, also boasts a Rotarian family background as his grandfather “was an old-school New England Rotarian.”

According to Lichtl, the events in his life were shaped and defined by the family members and friends around him.

“My grandfather was a very big part of my life,” Lichtl said. “He taught me chess when I was very young, and he never let me win because he wanted me to earn it. When I finally beat him, it was such a shock to both of us. I grew addicted to the feeling of working at something that you’re not good at until you’re good at it.”

Lichtl has accomplished many an academic and professional feat through his life. He started his college education at the age of 15: he associated with older kids through debate club at a young age and was able to reach a similar academic level as well.

With the mental qualification and a high level of persistency, Lichtl was admitted to the University of Texas after acing the placement tests.

A few years later, Lichtl transferred to Cal Tech, which is where he earned his bachelor’s degree, and later earned a master’s degree and Ph.D. in physics from Carnegie Mellon University.

After his grandfather, who encouraged Lichtl to pursue business, passed away, Lichtl was re-inspired to obtain an M.B.A. Although he endeavored on a successful career in finance in New York City, Lichtl eventually returned to his love for science after another tragic event: his close friend’s passing.

“The joy that came out of this was that we were able to reflect on what we were doing with our lives,” Lichtl said. “I want to die doing what I love.”

Through a serendipitous meeting at a party, Lichtl became connected to a manager at SpaceX, where he currently serves as Director of Research.

Although Lichtl fully loves and enjoys his job, he considers meeting his spouse the moment that he is most proud of.

“The greatest accomplishment I’ve had in my life so far would have to be the woman I married,” Lichtl said.

For more information on the members of the Santa Monica Rotary Club, visit rotaryclubofsantamonica.org.