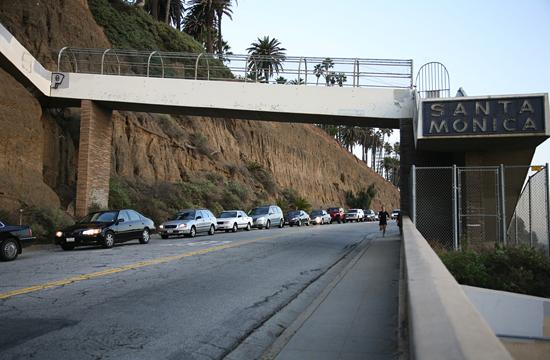 It’s T-minus seven days until a relatively small traffic artery will be closed in Santa Monica, but the project may have regional implications many miles away.

Warning signs have been placed as far away as the Ventura (101) Freeway, 25 miles away in Agoura Hills, warning drivers about the pending closure of California Incline, a two-block-long bridge that links downtown Santa Monica to Pacific Coast Highway.

The landmark bridge, which carries traffic up the side of a cliff, was built in 1930, and is falling apart. Santa Monica officials are worried about earthquakes or landslides, and plan to demolish the old bridge, shore up the cliffs, and build a new incline that looks like the old one.

The $20 million project is set to start Monday, April 20, and it will close a route that is used by 13,000 vehicles a day for 13 months. The worry is how those cars will back up onto PCH or surrounding Pacific Palisades or Santa Monica streets, as drivers seek out two detours, both narrow and twisting.

Santa Monica engineers have said the project may partially ease traffic jams on PCH, because the signal on PCH at California Incline will not turn red for PCH traffic during the 14 months or so of construction.

But Malibu city officials fret that the three other major road projects in Santa Monica will cause a severe crunch on PCH, the main access to Pacific Palisades, Topanga Canyon and Malibu and a route used by 80,000 vehicles daily.

A City of Los Angeles sewer project is still blocking 2 or 3 lanes of PCH just north of the California Incline, depending on each day’s work schedules. That project is more than two months over its schedule, and was supposed to be finished before the Incline was closed.

It will now block PCH lanes until about July 1.

And traffic to the south, between PCH and the only other direct road to downtown Santa Monica, is snarled by Expo Line and street reconfiguration projects overseen by Metro and the City of Santa Monica.

Traffic this weekend was already a knot on Ocean Avenue at the Santa Monica Pier, where the detour connector ramps — called Ahiko Moomat Way — connect PCH and Ocean Avenue.

Drivers needed 15 minutes to traverse construction at that corner Saturday afternoon, a reporter observed from a car. That route is the primary detour for the California Incline.

That has sparked fears along two narrow streets in Santa Monica Canton — Entrada and West Channel drives — which are expected to congeal into solid lines of stopped cars as people seek to get to and from the ocean.

“Santa Monica Canyon is going to get hammered more than anybody else,” observed resident George Wolfberg in an interview with the Santa Monica Observer. “When Santa Monica sneezes, we get pneumonia.”

PCH is used as a scenic relief valve for motorists travelling between Los Angeles and Ventura County or the Conejo Valley, and it also overloads with beach users most any sunny day on the coast.

Past construction blockages on the coast route have resulted in stopped cars on the Santa Monica (10) and San Diego (405) freeways, sometimes reaching all the way to Long Beach or downtown Los Angeles.

The California Incline bridge was built up the cliff to replace a dirt road in 1930. It has been featured in dozens of movies, including an old Keystone Cops feature in which a fire truck gets stuck making a tight turn and gets spun by a Pacific Electric  streetcar, which used to run along the botom of the cliff.