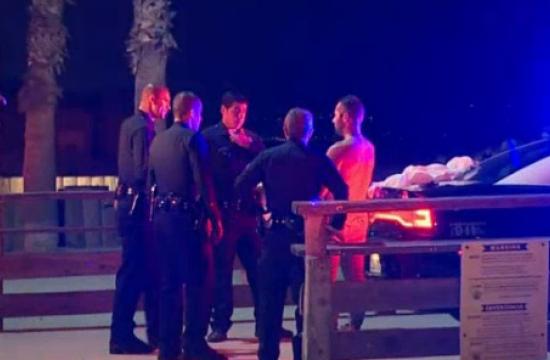 A man in his mid-20s today accepted what to turned out to be an expensive dare from friends at Venice Beach.

Police and firefighters were summoned to the scene. The man appeared to be seeking refuge among the pylons before he eventually came out of the water. He was placed in handcuffs and covered himself with a towel.

Gonzales said the man was cited for being on the beach after hours.

“I’m sure it’s going to cost him a pretty penny,” Gonzales said.

Gonzales said the large turnout of police and firefighters was prompted by the potential danger of the situation.

“We’ve had people get caught in the pylons and get all bloodied up,” Gonzales said.

“People jumping off the pier at night — it’s pretty silly. If you aren’t a swimmer or a surfer, you don’t belong in that water.”