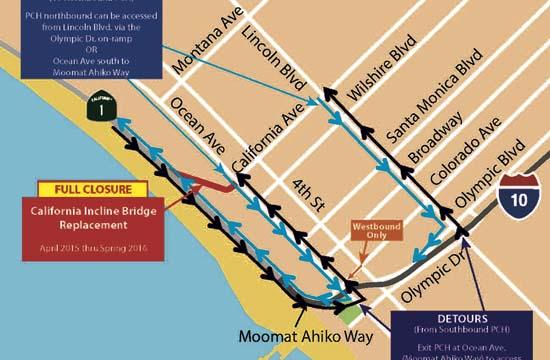 At mid-morning the Colorado Esplanade was busy with people walking to the Pier and the Park and Downtown and with cars on the westbound only lanes. At the California Incline, PCH and Ocean Ave. were relatively quiet with cars moving normally and people in the park walking and jogging, sitting on the benches, leaning on the fence, and watching the ocean.

Why three construction projects at once? Why build during the high tourist summer months? Why start the California Incline before the PCH sewer work is complete?

“The California Incline Bridge is substandard, meeting only 30 percent of the standards used to evaluate the structural integrity of the bridge. A lot has changed since 1930 when this bridge was built,” Polachek said.

“No matter when we start it will take a year to complete the project even though it’s a fast-track project. We timed it so only one summer season will be affected by construction.”

“We will be continually responding to daily problems and events and will be tweaking details as things happen to make this as smooth as possible.”

Originally called the “Sunset Trail” the wood fenced path led from Palisades Park to the beach. Wikipedia lists the trail as being built in 1896 and replaced in 1930 and in continuous use until today’s closure.

“Bringing the California Incline to current seismic standards is the reason for this project. We’ve been working on this project for a long time to secure funding and to receive all the approvals necessary to meet the Federal and State standards. Ninety percent of the $20 million cost of the project will be federally funded,” said Susan Cline, Interim Director of Public Works for the City.

“Once the resources and approvals were secured we moved forward as quickly as we could on this project because it is in the interest of public safety.

“The new bridge will be 52 feet wide. There will be two vehicle lanes, two bicycle lanes and a pedestrian walkway. The iconic design of the fence will be maintained.”

The California Incline is on its own schedule, determined by public safety and by guidelines that come with the Federal funding. The two other big construction projects, the light rail station, run by Expo, and the City run Colorado Esplanade are being coordinated so that the Esplanade is ready when the first passengers get off the light rail train at the 4th Street Station.

“The Colorado Esplanade is designed to be an extension of the light rail, a gateway to the downtown, the Pier and Palisades Park,” said Cline.

At a cost of $13 million the Esplanade is funded by a combination of city general funds, federal funds and special revenue funds. The idea behind the Esplanade design was to make it easier and more fun to walk and bike than to drive.

The 6.6 mile light rail line currently under construction will extend Expo from Culver City to Santa Monica. Expo projects that, by 2030, there will be 64,000 people who ride the Expo line along the Downtown Los Angeles/Santa Monica route. The total cost of the line is estimated at $1.5 billion.

For now plan your detours and your alternate routes. But hold on to the thought that 64,000 Expo riders overall will translate into thousands fewer people coming to Santa Monica in cars and easier trips to downtown LA for Santa Monicans. Hold on to knowing that the California Incline will not fall down in an earthquake.

It’s early times, and there are and will be many problems that need to be solved so people can get where they need to go. But in a year maybe there will be a party celebrating the end of construction on the “Big Three” and the reason will be more people walking and biking and people in cars having a much easier time of it.