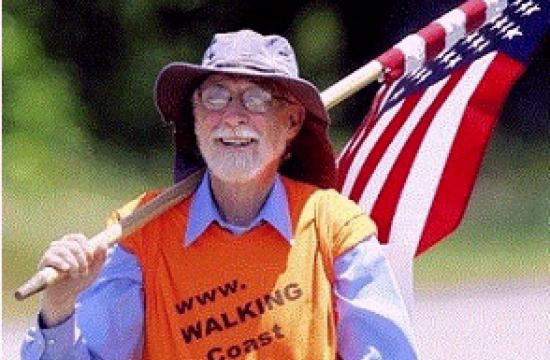 Tennessee Pastor Walter “Chick” McGill, a 69-year-old Vietnam Veteran, is completing the first coast-to-coast national prayer-walk in US history, carrying a large American flag and saluting every passing motorist on the walk route as a gesture of honor and respect for his fellow Americans.

The pastor is praying for our nation and each community along the walk route, distributing a memento prayer booklet at town halls along the way.

He received certificates of appreciation while walking through the Inland Empire and San Gabriel Valley.

This pedestrian journey has covered over 3,200 miles so far, and once the project is completed, McGill’s flag will be the first ever to be hand-carried “from sea to shining sea” by a veteran.

Pastor McGill’s “TransAmerican Crosswalk 2014” is promoting “’a new birth of freedom’ and integrity in America, calling attention to the Ten Commandments, the Golden Rule, and our nation’s founding documents.”

To see the progress of this cross-country adventure, visit www.walkingcoast2coast.com.