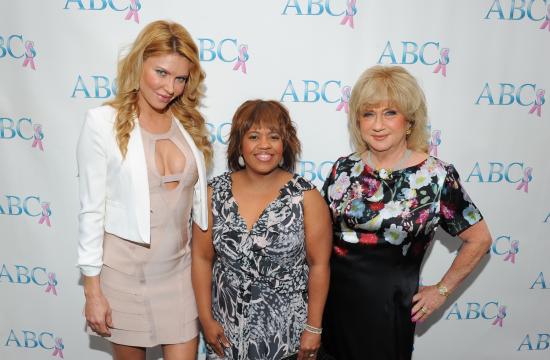 The afternoon honored award-winning actress, writer and director Chandra Wilson, star of Grey’s Anatomy, and author and former top model Brandi Glanville of The Real Housewives of Beverly Hills with the organization’s “Women of Achievement Award.”

The event showcased an informal fashion show by St. John Boutique, Beverly Hills. Actress, comedienne and author Lisa Ann Walter, emceed. The luncheon featured a luxury boutique, including a fashionable array of select vendors, each donating a portion of proceeds from their sales to the organization.

Event co-chairs Beverly Cohen and Sheri Rosenblum welcomed over three hundred guests, thanking them for their support of the ABCs and recognizing that “cancer has touched so many of our lives…we need to work together to fund research for better and safer treatments and ultimately a cure.  That is the goal of the ABCs.”

Giving a special shout-out to Gloria Gebbia, President of the ABCs, Wayne lauded the group, noting that “because of you, John Wayne Cancer Institute’s world-renowned faculty are leading the way for research breakthroughs in the fight against cancer by discovering novel approaches to detect cancer in a single drop of blood and therapies to activate the immune system. We are not just working toward finding the cures for cancer, but one day preventing it all together.”

Actress Nicole Rubio, a star on the big screen in Training Day and on television in Star Trek and Grey’s Anatomy presented the “Women of Achievement Award” to her fellow Grey’s Anatomy co-star  Chandra Wilson.

The ABCs was formed 25 years ago by a group of dedicated philanthropists who had originally been associated with the Eddie Cantor Charitable Foundation, an organization that supported a variety of causes.

These individuals wanted to devote all their charitable efforts and resources to eradicating cancer and unanimously chose to support progressive and innovative breast cancer and prostate cancer research at the John Wayne Cancer Institute.

Today, the Associates for Breast and Prostate Cancer Studies are over 150 members strong and growing. They dedicate their efforts to funding research in breast and prostate cancer at the Institute, and since 1990, have raised over $14 million. For more information, visit www.abcjw.com.