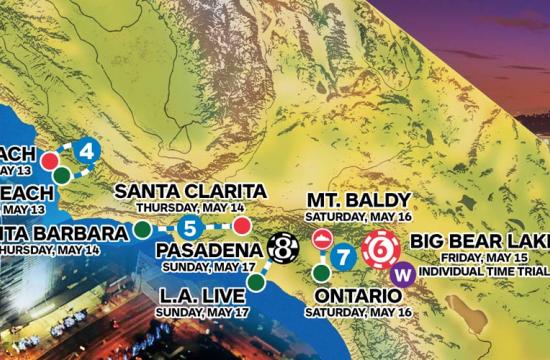 The Amgen Tour of California will conclude today with a 65.4-mile stage from downtown Los Angeles to the Rose Bowl and Frenchman Julian Alaphilippe holding a two-second lead over Peter Sagan of Slovakia.

The stage will start at 9:15 a.m. on Chick Hearn Court, between Staples Center and L.A. Live. The field will then race five laps on a five-mile circuit that heads north to City Hall and passes the Cathedral of Our Lady of the Angels, the Music Center, the Biltmore Hotel and Pershing Square before returning to L.A. Live.

The field will enter Pasadena on Colorado Boulevard, crossing the Colorado Street Bridge to the Arroyo Seco. The riders will race nearly one 3.1- mile circuit of the Rose Bowl before reaching the finish line on West Drive, where they will have to complete seven laps of the circuit to finish the stage.

A group of 10 cancer survivors selected in a nationwide search, including two from Los Angeles County and one each from Orange and Riverside counties, will participate in the “Breakaway Mile,” a special walk along the race course to honor the millions of cancer survivors worldwide and be honored at the finish.

The 2015 Breakaway from Cancer Champions from Southern California are:

— Mary Carrillo of Irvine, a single mother who made it her life mission to end blood cancers when she lost her 7-year-old son, Calvin, to acute lymphoblastic leukemia on March 24, 2014. She is deeply involved with the Leukemia and Lymphoma Society, raising funds for research and advocating for patients, and hopes to start a foundation in her son’s name that will assist pediatric cancer patients and their families.

— Nick Gleissner, a cancer survivor from Hemet who was in his sophomore year of high school when diagnosed with a malignant and inoperable brain stem tumor in February 2006, seven years after losing his brother to a rare and aggressive form of cancer.

A two-year stretch of hospitalizations, therapies and visits with specialists followed. Gleissner’s memory, speech and vision were affected, and he also had to re-learn to walk, talk, feed and dress himself.

His father bought him a three-wheeled adult trike that helped in his rehabilitation and sparked a passion for cycling. He rode in his first century ride in 2011 and has completed 15 more single century rides and two double century rides.

— Robert Hess, a Manhattan Beach resident who, inspired by his own journey with cancer, founded the Prostate Cancer Awareness Project in 2006 to raise awareness surrounding early detection. Through PCAP, Hess developed ProstateTracker, an early warning tool that is free online, to monitor PSA levels and send reminders about annual screenings.     — William Kenny of Los Angeles, who was a successful television writer and producer when he was diagnosed with testicular cancer at age 30. His journey with cancer and interactions with nurses inspired him to go back to school. He’s now a Senior RN at Children’s Hospital Los Angeles.

“Nearly everyone has been touched by cancer in some way or another, and Amgen’s hope is that by sharing the stories of these 10 courageous Breakaway from Cancer Champions, we will in turn help someone facing a similar situation,” said Raymond C. Jordan, Amgen’s senior vice president of corporate affairs.