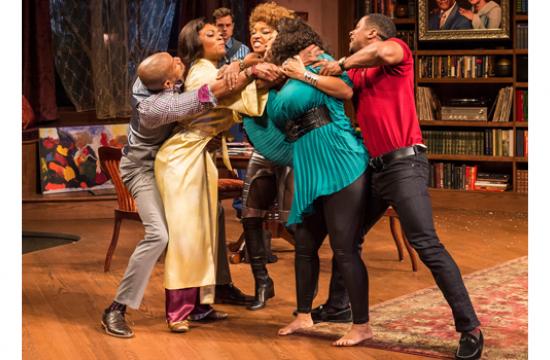 Paul Oakley Stovall’s “Immediate Family” blasted off like a rocket and continued its hilarious trajectory throughout the 90-minutes of almost non-stop merriment. You could say it was a kind of an “All In The Family” sitcom on speed as it dealt with the complications of revealing an alternate life style versus adhering to traditional family values, as well as smoldering sibling resentments. Serious subjects are handled in almost a farcical manner.

The shenanigans take place in the beautiful Bryant family home in Chicago’s Hyde Park.  The gorgeous set design by John Iacovelli created a luxurious space with a living room, working kitchen, and stairs leading up to the bedrooms. He enhanced the setting with an indoor-outdoor feel, including a garden seen through the window on stage left and flowers and a large tree outside the window on stage right.

The parents’ home is now occupied by the oldest sister Evy, a teacher and the most militant of the lot. Skillfully played by Shanésia Davis, the play opens with a powerful speech Evy plans to present to her students. It covers the usual topics, emphasizing that black people need to keep standing up for their rights and support each other to achieve real freedom and equality. At first, it looked like it was going to be an evening of diatribe.  But, the evening turned out to be anything but.

Basically, the plot revolves around the Bryant family, who are gathering in their childhood home to attend their brother Tony’s wedding. Kamal Angelo Bolden’s Tony is a bit immature but his physical antics are like watching a meteor streak across the sky, tearing up the stage with his crack comic timing and deadpan, sometimes wide-eyed, “innocent” reactions.

Next we meet Jesse, an imposing hunk of a man wonderfully played by Bryan Terrell Clark. Jesse has flown in from Minneapolis to attend his brother’s wedding. He has not told the family that he is gay and is very conflicted, as he knows his sister Evy, especially, would judge him harshly. Jesse approaches the subject with his brother Tony by talking about his partner Kristian, who by the way, is there ostensibly to be the official photographer at the wedding. Kristian is played by Mark Jude Sullivan, who imbues his character with just the right about of love and innocence.

Tony: You have a business together?

Tony: (Laughing) I knew that.

Then there’s the flamboyant Nina, the outrageous next-door Lesbian neighbor, played to the max by a most talented J. Nicole Brooks. Her body must be made of rubber as she contorts it into many hilarious directions all at one time, which won great audience approval. Nina dresses like a hooker and is definitely the court jester throughout the play.

The last sibling to arrive is Ronnie, played with subtle humor by Cynda Williams.  Ronnie is an artist living in Belgium. She had a different mother who was white, but shared the same father. It seems their father did quite a bit of begetting, as beside Ronnie, there is a whole bunch of half brothers and sisters living in Belgium. Ronnie loves boozing it up and arrives with a suitcase filled with an assortment of liquor, imbibing throughout the evening. There is palpable tension between her and Evy, which at one point culminates in Ronnie flinging a glass across the living room, followed by a physical confrontation, which the other siblings break up before much hair pulling could take place. At the end of what was almost a fight, Ronnie struts across the stage holding a drink and casually says: “Sorry about the glass. Good night.”

In one of the few serious scenes, there is an intense conversation between Jesse and Evy where she lectures him on is duty as a black man. “You should get married to a black woman and make black children.” Jesse takes that opportunity to remind her that she is, indeed, childless and she responds that she and her husband have been trying, but are now taking a break from each other.

Poor Kristian finally arrives which shocks Tony, as it didn’t occur to him that Jesse’s partner is Caucasian. In one of the many laugh lines, the conversation goes like this:

Jesse: Nothing gets past you Colombo!

Kristian very considerately brought gifts for everyone, but Evy refuses to touch hers. He is bewildered by the hostile family dynamic and is upset with Jesse for not being stronger and not making a commitment to get married.

There is a lot of “shtick” in the sometimes outrageous behavior of this incredibly talented ensemble, who, under the impeccable direction of Phylicia Rashad, endow their characters with a most active, almost gymnastic physical life, some of the movements recognizable as being from the “hood.”

Lest you are worried about how this family stuff is all going to end, never fear as the playwright is a master of playing with emotions and like an artist with a colorful palette, knows exactly how to highlight and shadow what, really in the end, is a rather complex set of family issues presented as a comedic slice of life.