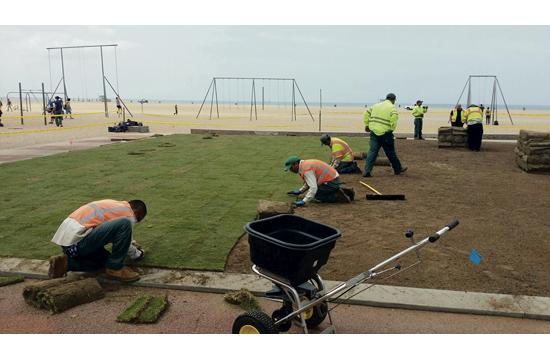 Sandwiched between a cement walkway and Muscle Beach’s eclectic collection of workout structures is a patch of newly laid grass that has at least one man scratching his head asking why it’s there following the City urging residents to get rid of lawns for more drought tolerant landscaping.

For Aldo Davanzo, a longtime Santa Monica resident, the new lawn is an example of the City wasting water on an area that “the last time [he] saw someone working out on was when Arnold Schwarzenegger was there in the 1980s.”

“I thought ‘well, that really doesn’t make sense; we have to dispose of our lawns and they are putting it on the sand,’” said Davanzo.

Debbie Lee, Communications and Public Affairs Officer for the City of Santa Monica, explained why the new lawn was installed.

“Due to its popularity, the grass area at Muscle Beach is heavily used and was unsafe, worn and in a state of disrepair,” Lee said. “We received many complaints from the regular users who raised safety concerns about the condition of the turf, particularly the divots.”

The City of Santa Monica is offering a rebate of up to $4,500 to residents who replace their lawns and other water guzzling plants with more drought-tolerant ones. The initiative comes as a way to help incentivize the City’s 20 percent water reduction goal.

The initiative has contributed to a peer pressured chain reaction of water consciousness, a keeping-up-with-the-Jones California-drought style.

“My wife and I have been talking about the need to replace our lawn in front of our house because most of the neighbors have been turning their lawns into desert gardens,” Davanzo said.

Drought consciousness has even picked up momentum on social media.A trend known as “drought shaming” is gaining momentum by which a person posts a picture on Twitter or Facebook of their neighbor’s verdant lawn and then sit back and watch as the vitriol spreads like a virus.

“People usually leave their homes to go to the beach to be on the sand, not on grass,” Davanzo said.“At least I don’t.”

However,for people like Jay Bentley, who is a Muscle Beach local, the patch of grass is anything but an example of the City’s irresponsible use of water.

“If it wasn’t for that little green right there,” said Bentley, as he pointed toward the patch of grass, “there would be a lot of people that wouldn’t be here on a Sunday. It’s amazing. It’s standing room only on that grass. It’s the most popular spot in America.”

Raul Amador, an employee at a rental shop near Muscle Beach, used two words to describe the patch of grass: “full” and “crazy.”

The patch of grass is part of the larger history of Muscle Beach, which was first established in 1934 by the national Work Projects Administration (WPA) and has since drawn world-renowned gymnasts and body-builders like Arnold Schwarzenegger.

“It’s the perfect spot, the perfect surface,” said Bentley, referring to the grass.“It’s inspirational. Literally,when I saw this I knew that this was for me. Not the gym, this.All this,” he said, moving his gaze from the small patch of grass out towards all of Muscle Beach and then to the endless horizon of the Pacific Ocean. “It changed my life.”