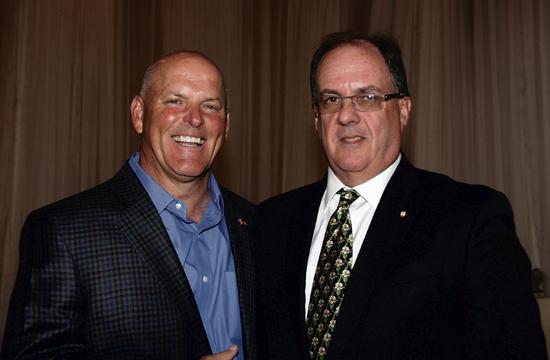 A sing-along of the pop-hit “The Safety Dance” by Men Without Hats got the Santa Monica Rotary meeting underway last Friday.

The reason for the song wasn’t to call-out the audience’s less rhythmically inclined members with the lyrics “we can dance if we want to / we can leave your friends behind / cause your friend don’t dance / and if they don’t dance / well they’re no friends of mine.”

Rather the song was to introduce the main speaker of the night, Consul General James Villeneuve of Canada, with a song from a Canadian band that he was familiar with.

Villeneuve is Canada’s senior representative in Southern California, Arizona and Nevada. He has served on many boards during his career, including the Toronto Economic Development Commission, the Metro Toronto Convention Center and the 2008 Toronto Olympic Bid, to name just a few.

Villeneuve came to talk about Canada, including topics on the intersection of Canada and Los Angeles in business, culture and politics.

“I laughed at the selection of Men Without Hats. That is kind of an obscure Canadian band. We have others like Joni Mitchell, Celine Dion and Arcade Fire to name a few,” said Villeneuve to the delight and laughter of the crowd.

He then began with his presentation.

“Canada is a really diverse and global place for those of you who have been there,” he said. “Their schools always rank in the top 20 nationally, and top 10 in standard of life nationally. There is a tremendous amount of emphasis on education. Our public schools are well funded and we have private schools as well and it is also a land of technology and innovation.”

Because of the global economy and educated work force, Canada makes a great place to start a business and to grow and innovate.

“It is a very very competitive economy and a great place to expand businesses,” said Villeneuve. “It will be a whole lot easier to set up a business in Canada as compared to China or India because of the government and the language.”

Some areas in the northern part of Canada, until recently, have been somewhat unchartered, he explained.

“Canada is a big country. It is the second largest in the world in terms of land mass,” he said. “A lot of that is in the northern parts, so it is somewhat inhabitable, though some do live up there. But what they are finding a tremendous amount of resource up there. My wife used to work on a project in the very northern part of the country where they used to find diamonds, gas, wood, you name it.”