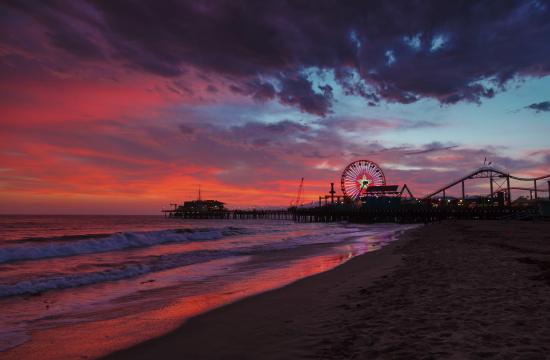 The American Shore and Beach Preservation Association (ASBPA) announced last week that the City of Santa Monica is a winner of its 2015 Best Restored Beach Award.

“ASBPA created the Best Restored Beach award as a way of highlighting the value of America’s restored beaches,” said Harry Simmons, mayor of Caswell Beach, N.C., and ASBPA president. “As Americans flock to our coastline during the upcoming beach season, most don’t even realize they may be enjoying a restored beach.”

For nearly 130 years, Santa Monica State Beach in Santa Monica, California, has been a dynamic link between the natural and man-made worlds, providing equal access to all who wish to congregate near this part of the coast.

The existing wide beach in Santa Monica owes its existence primarily to the offshore breakwater.

North Beach is characterized by an abundance of sand and sweeping views of Santa Monica Bay. South Beach is alive with popular “people places” such as Chess Park and the original Muscle Beach.

It is here that the modern Southern California “beach culture” – surfing, beach volleyball, rollerblading, skateboarding, and spectacular sunsets – got its start.

The historic Santa Monica Pier connects the more contemplative North Beach with lively South Beach. Up to 50,000 people enjoy the beach on a typical summer day – with 5 million visits annually – making it one of the region’s most treasured public assets.

Offering spectacular views, opportunities for recreation and social interaction, and a touch of history and culture, Santa Monica State Beach is one of 10 APA Great Public Spaces in America for 2008.

The designation stems from the beach’s commitment to accessibility, environmental stewardship and historic preservation, and maintaining its distinctive character.

The beach stretches 3.5 miles along the California coast, from the beaches of Malibu to the coastline of Venice.

Featuring 245 acres of sand, the beach is framed by a series of linear parks, some with playgrounds, a restored historic pergola and gazebo, native landscaping, and the iconic palm tree.

“We chose this as a Best Restored Beach because it is an iconic American beach that has not only hosted millions of visitors each year, but is used in movies and television programs to exemplify the beach life,” said Lee Weishar, ASBPA Best Restored Beach Committee Chair.

For more than 50 years, beach restoration has been the preferred method of shore protection in coastal communities on the east, west, Gulf and Great Lakes coasts. Beach restoration is the process of placing beach-quality sand on dwindling beaches to reverse or offset the effects of erosion.

The three main reasons for restoration are:

Coastal communities have restored more than 370 beaches in the United States, including such iconic beaches as Jones Beach in New York, Ocean City in Maryland, Virginia Beach, Miami Beach, South Padre Island in Texas, Venice Beach in California and Waikiki Beach in Hawaii.

During times of economic hardship, the beach can be an even more desirable vacation destination than other domestic and foreign alternatives, offering families and visitors an accessible and affordable getaway. It is also an employment and tax generator:

— Beaches contribute an estimated $225 billion annually to the America’s economy.

— Each year, governments take in $570 in taxes from beach tourists for every dollar it spends on beach restoration.

— Well over half of the nation’s gross domestic product ($7.9 trillion) is generated in 673 counties along the oceans and Great Lakes, according to NOAA’s National Ocean Economics Program.

To enter the Best Restored Beach competition, coastal communities nominated their projects for consideration, and an independent panel of coastal managers and scientists selected the winners.

Judging was based on three criteria: the economic and ecological benefits the beach brings to its community; the short- and long-term success of the restoration project; and the challenges each community overcame during the course of the project.

A complete list of award-winning beaches, and more information about beach restoration and ASBPA, is available online at www.asbpa.org.