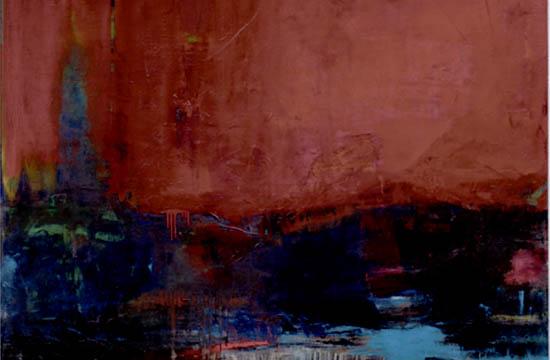 “You have to do the work even when it’s not going well,” were Diana Gordon’s words when talking about making art. “It’s not a sometimes thing. You have to be disciplined.”

Gordon was speaking about her current show at FIG Gallery, Bergamot Station (figgallery.com).

She could have been talking about so many parts of her life.

Publicly known in Santa Monica for her involvement in local politics, Gordon was one of the founders of the Coalition for a Livable City (smclc.net).

“It was my first Council meeting,” said Gordon talking about her introduction to Santa Monica politics. “I went to a hearing on the plans for the renovation of Santa Monica Place. The meeting was long. Many articulate people spoke. Yet it felt as if it were a done deal.”

Fast-forward to the present time.

“I think we are at an interesting crossroads in Santa Monica,” she said. “The Hines project was a decisive turning point and residents are now organized in a way that makes their voices heard.”

“My grandmother was an artist,” she said. “She was raised at a time when women were taught to paint on china and paint watercolors as part of their college educations. It wasn’t until the later years of her life she began painting landscapes. That fascinated me. She painted for the sheer joy of painting.”

Gordon was also influenced by her mother’s friends.

“My mother had two best friends, one was with a major ad company and the other was a fashion buyer for a major department store in the Midwest,” she said. “They had interesting work and I wanted to have interesting work too.”

“When I was a junior I did a year abroad in Madrid,” she said. “I studied at the Prado and saw for myself the worlds created by artist such as Goya and Bosch.

Having grown up in the San Fernando Valley the artists I studied at the Prado were a revelation.”

Being a painter herself was in her future, but Gordon didn’t know it yet.

She graduated UCLA with a major in history and went on to law school at UC Davis.

“I liked being a lawyer,” Gordon said.

“I went into the field of business and entertainment litigation and practiced law for most of my adult life. I only began transitioning to being an artist in the last 12 years.”

In 2003 Gordon inherited a treasure trove of paints, art materials, and books about art. It seemed the inheritance came at just the right time in her life.

Gordon began to study with the artist Martin Lubner at his studio in Venice, CA.

“Abstract art interests me because it is a nonverbal language and it requires an emotional understanding whereas with figurative art our minds recognize the object,” Gordon said. “How color works in the service of other color, the diversity, the range and the dialogue of color fascinates me.”

Gordon said the process of painting is, for her, like being a lawyer.

“You are always working to marshal ideas and winnowing down to the strongest possible statement,” Gordon said. “Everything that you’re passionate about in your life makes your life and your work better.”

By mirrormmg May 30, 2015
in Opinion
Related Posts