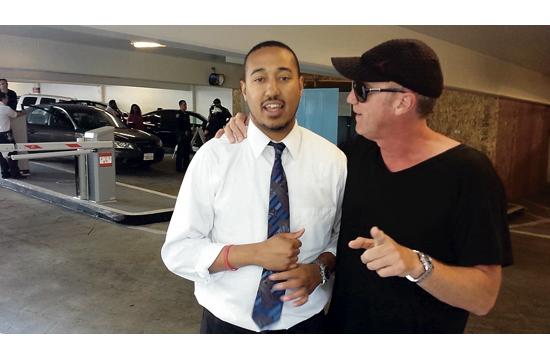 A man working at Trastevere restaurant on Third Street Promenade experienced every server’s worst nightmare last week: a couple who tried to dine and dash – but luckily a good Samaritan literally put his foot down to stop the suspects from getting away.

Server Keenan Wildy said he had just visited a couple’s table with the check as asked and then was called away to attend to another customer.

“I came back for the check and the couple was gone,” Wildy said. “A homeless guy was saying ‘they’re running, they’re running,’ so I peeked around the corner and I could see they sprinted from the Promenade to about Second Street.”

Wildy was working his shift last Thursday evening when the couple decided to dine and dash.

“So I hopped out of the patio and started chasing them,” Wildy said. “I’m in dress shoes and a tie and, when I get to the alleyway, I slip and fall, apron comes off, all my pens fall out – I kind of got hurt and by now I can see them high fiving and laughing.”

The moment is set up for that overly stylized Hollywood motif when the villain gloats too soon, allowing the hero a chance to save the day.

To the rescue is a man who goes by the name of Robin Hood 702.

“So I hear someone yelling ‘stop, stop, you owe this man money, you are not going anywhere’ and I turn the corner into a parking lot [where I saw the couple go] and this guy named Robin Hood has his foot on the hood of their car telling them that they aren’t going anywhere,” Wildy said.

The hulking frame of the Good Samaritan Robin Hood is splayed out with a foot on the dine-and-dashers’ hood, demanding justice.

“I put my foot on the bumper and I have a pretty big wing span – I mean I am 6 foot five,” said Robin Hood. “And they looked at me like I am nuts and said to me, ‘we’re going to run you over.’ And I said ‘you are not leaving here unless you pay this bill.’”

Both the woman in the passenger seat of the car and Robin Hood take out phones to call 911 in between some of the shouting.

Police responded but did not make an arrest nor give a citation as the couple settled up their bill in the parking structure. Robin Hood helped get the money for the bill back to Wildy before police had arrived, tip included.

And the only thing Robin Hood asked for in return was to “pay it forward.”