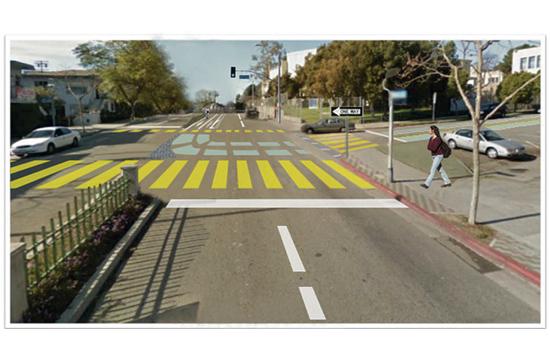 Construction will begin soon on an approximately $1 million project that will improve the intersections, crosswalks, streets, signage, and bikeways around Santa Monica High School.

The City was awarded a $880,000 State of California Safe Routes to School Program grant with a local match of $100,00 to complete the project.

The goal is to encourage students to use alternate modes of transportation to and from school by ensuring safety and easy accessibility.

It will close a key network gap between the Michigan Avenue Neighborhood Greenway and the beach, as well as to the Ocean Park neighborhood.

There will also be road configurations to make Michigan Avenue one-way westbound between Lincoln Boulevard and 7th street and a new signalized intersection built between 7th and Pico Boulevard – intended to reduce conflicts between pedestrians and vehicles during drop-off and pick-up.

A bid was agreed to by the City with All American Asphalt, the details of which will be negotiated by the soon-to-be-announced City Manager.

City staff will conduct public outreach during construction of the project in order to receive feedback and disseminate current project information, which will include alerting the public to detours, key milestones, and project objectives.