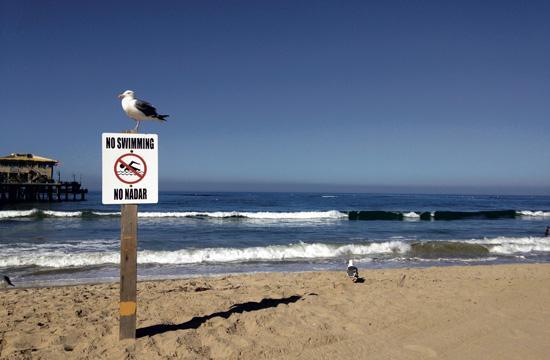 A high surf advisory issued by the NWS will be in force until 11 p.m. Tuesday along the Los Angeles and Orange county coasts amid a “high” risk of rip currents and surf of between five and eight feet in height, with sets reaching 10 feet along some south-facing beaches. The highest surf is expected to occur around Malibu and Zuma beaches through Tuesday morning.

The NWS said the high surf is the result of a long-period swell produced by a storm in the southern hemisphere.

“Very strong rip currents will affect many beaches through Tuesday,” the NWS warned in a statement. “In addition, south-facing harbors and bays across the Channel Islands, including Avalon, Port San Luis, San Simeon, and Cayucos could see significant currents capable of dislodging moored vessels and docks.”

The weather service had a special warning for swimmers.

“Remember, swim near a lifeguard or when in doubt, stay out,” the statement said. “Do not climb on jetties as large waves can sweep you off the rocks easily. Never turn your back to the ocean as sneaker waves can inundate beaches and pull people into the water.”

The NWS forecast mostly cloudy skies today and highs of 62 at LAX; 64 in San Clemente; 65 in Laguna Beach; 66 in Newport Beach; 67 in Long Beach, Avalon and on Mount Wilson; 68 in San Gabriel; 69 in Burbank, Irvine and Mission Viejo; 71 in Fullerton, Pasadena and Woodland Hills; 72 in Yorba Linda; 73 in Saugus; and 79 in Palmdale and Lancaster. A warming trend is expected Friday.