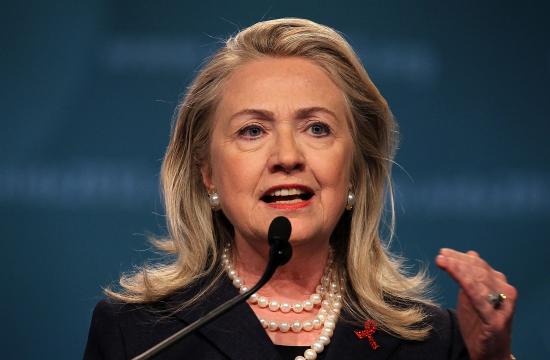 Former Secretary of State Hillary Rodham Clinton today will hold the first Southern California fundraisers for her campaign for the 2016 Democratic presidential nomination.

Clinton will attend a $2,700-per-person breakfast reception at the Westwood home of Catherine Unger, a member of the Women’s Political Committee, according to published reports.

Clinton will then move to another $2,700-per-person event, a luncheon fundraiser at the Pacific Palisades home of television producer Steven Bochco and his wife Dayna, The Hollywood Reporter and Variety reported, citing sources with knowledge of the campaign’s plans. Sen. Barbara Boxer, D-California, is scheduled to attend the fundraiser.

Clinton will also conduct a $2,700 per person early dinner fundraiser at the Beverly Hills-area home of billionaire media giant Haim Saban, according to the entertainment industry trade publications.

The $2,700 figure for the events stems from the maximum individual contribution for a candidate seeking his or her party’s nomination.

There was no immediate response to an email sent to the Clinton campaign seeking confirmation of the events.

Clinton is also scheduled today to meet with donors to the Priorities USA Action super PAC, The New York Times reported, citing information from two people familiar with her schedule.

A super PAC is a political action committee that may raise and spend unlimited amounts of money, including from corporations and unions, to campaign independently for candidates for federal office.

Clinton does not have any events open to reporters or the public planned for today.

“Everyday Americans are waiting for answers and it’s very clear that answering their questions isn’t a priority to Clinton.”

In the video released April 12 announcing her candidacy, Clinton said “Everyday Americans need a champion. I want to be that champion.”

Clinton is coming to the Southland in the middle of a three-day California fundraising swing.

She was in San Francisco Wednesday and is scheduled to return to Northern California Friday for a fundraiser at the Portola Valley home of eBay CEO John Donahoe and his wife Eileen, a former ambassador to the United Nations Human Rights Council, the San Francisco Chronicle reported.

Before today’s final fundraiser, a protest is planned in Beverly Hills to demand Clinton oppose the Trans-Pacific Partnership, organizers said.

The group plans to meet at Will Rogers Memorial Park, across from the Beverly Hills Hotel at 4 p.m., then march a half-mile to the corner of Tower Road and Benedict Canyon Drive to wait for Clinton’s motorcade.

Opponents of the trade agreement claim it will continue the trend of exporting millions of high-paying jobs to low-wage countries, reduce wages for 90 percent of American workers, lower food safety and environmental standards, and increase human rights abuses.

“Second, it must also strengthen our national security. We should be willing to walk away from any outcome that falls short of these tests. The goal is greater prosperity and security for American families, not trade for trade’s sake.”

Clinton “will be watching closely to see what is being done to crack down on currency manipulation, improve labor rights, protect the environment and health, promote transparency, and open new opportunities for our small businesses to export overseas,” Merrill told The Times.

“As she warned in her book, ‘Hard Choices,’ we shouldn’t be giving special rights to corporations at the expense of workers and consumers.”

Clinton’s only major announced opponent for the Democratic nomination, Vermont Sen. Bernie Sanders, said on the Senate floor last month that “allowing the Trans-Pacific Partnership to be passed will make it easier for more companies to shut down operations in the United States and move to Vietnam and that is wrong.”

“Fast track means nobody’s paying attention,” Huckabee said. “The last time we really fast-tracked something was Obamacare and that’s when we passed it and then we would know what’s in it.

“Why would we ever want to again believe that the government fast- tracking something without thoroughly understanding the implications is the best way to go? It may be a great trade agreement, but it needs to be very thoroughly examined to make sure that it’s not going to put Americans out of work.”