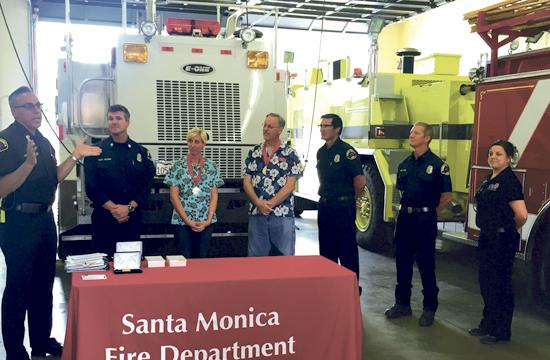 The Santa Monica Fire Department recognized three employees of Trader Joe’s for their actions in trying to save the life of a citizen who was discovered unresponsive in a parked vehicle at a local Trader Joe’s store on the afternoon of April 20.

Santa Monica Public Safety Dispatchers provided instructions over the phone to the employees who began CPR at their store at 3212 Pico Blvd. until paramedics arrived on scene. Despite their efforts, the citizen passed away – the person’s cause of death was not released.

On Wednesday, the Trader Joe’s employees – Mark Wald, Chelsea Kirtley, and Krishan Narayan (not present) – were awarded medals for their actions.

“This citizen recognition award is relatively new,” said SMFD Battalion Chief Jeff Furrows.“It has been formed in conjunction with our Fire Fighters Association and Santa Monica Fire Department. And it is really designed to recognize those who go above and beyond.”