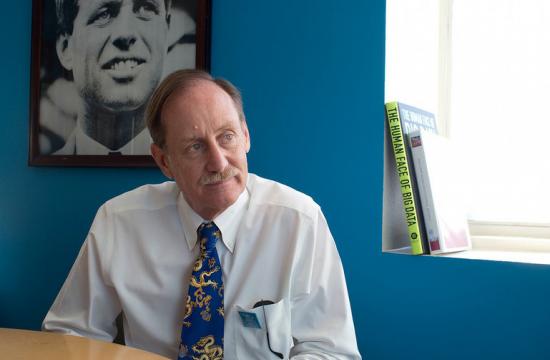 Newly appointed City Manager Cole, who replaces Rod Gould who retired in January, has more than a qualifying resume for the position.

He has served as City Manager of Venture and Azusa, Mayor of Pasadena, and was appointed by L.A. Mayor Eric Garcetti to Deputy Mayor for Budget and Innovation.

“When I made reference calls to those who have worked with our selected candidate, I heard things like ‘approachable,’ ‘visionary,’ ‘good listener,’ ‘brought our community together,’ and ‘found the balance between community development and quality of life,’” McKeown said. “We had a number of candidates, many of them impressed me—Rick moved me. I am really looking forward to working with him.”

Cole will be taking over for Elaine Polachek, who has been serving as Interim City Manager and had advised Council that she did not want to be considered for the position.

After McKeown made the announcement, council members had an opportunity to comment on the hiring of the new City Manager.

“When I think of Rick—and I’ve known him for a number of years—the word ‘integrity’ comes to mind,” said Councilwoman Gleam Davis. “He is one of the people that I think embody that concept, so we are lucky to have him, and I look forward to working with him along with the entire community.”

Mayor Pro Tempore Tony Vazquez said that he has always been impressed by Cole and considers him very “innovative.”

“Unlike everyone, I’ve only known [Cole] for two months, but I have had lengthy conversations with him,” said Councilwoman Sue Himmelrich. “And those of you who know me know I have big issues, one of them being transparency and the other being social justice, and I found him to be on the page that I am on with these issues.”

In a statement to the media, Cole said the City of Santa Monica today was shaped by the last three decades of remarkable Council, staff, and community leadership.

“It is both a national model and a personal inspiration to me as a model for sustainable urban policies and practices,” Cole said. “The challenge ahead is to reconcile the success of that model with powerful market forces to ensure that Santa Monica remains a city that works for everyone.”

As Deputy Mayor for Budget and Innovation for the City of Los Angeles, Cole is currently responsible for a  budget of $8.6 billion and oversees five city departments with more than 3,000 staff. He also supervises LA’s Chief Sustainability, Technology and Data Officers.

He has been recognized as one of America’s Public Officials of the Year by Governing Magazine and one of the “Top 25 Doers, Dreamers and Drivers” by Government Technology Magazine.

Cole has won awards for municipal management excellence from the American Society of Public Administrators and the Municipal Management Association of Southern California, as well as for urban planning leadership from the Congress for the New Urbanism.

Cole served 12 years on the Pasadena City Council and was Mayor when Pasadena adopted its landmark General Plan, an early model for smart growth.

Called “one of Southern California’s most visionary planning thinkers” by the Los Angeles Times, he has been an active leader in the International City Managers Association and the City Managers Department of the League of California Cities.

Today, May 28, Council will discuss the specific details of Cole’s contract.

McKeown said that they anticipate he will be introduced to the community at the June 9 City Council meeting, followed by a reception downstairs. Cole was not present at Wednesday night’s meeting.

“When a city council quickly and unanimously settles on a candidate as being the right person, just altogether almost organically, it is a very exciting moment,” said McKeown.